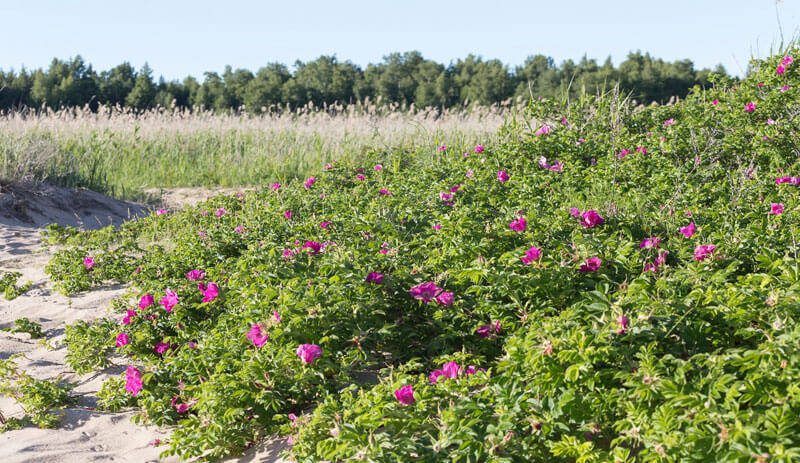 While much of Cape Cod’s iconic sights face the sea, we will turn towards the land for this piece, exploring a few of the unique plants rooted in the Cape and Islands and the fascinating histories behind them.

While they are now common on the Cape, this species originated in eastern Asia.

It is said to have come ashore with the shipwreck of the Franklin on Nauset Beach in 1849. The ship sank in what turned out to be a conspiracy for the insurance money, and several passengers drowned in the wreck. The Franklin had been carrying nursery stock from a Scotsman who hoped to start a horticulture business in Boston.

Thanks to the sandy beaches of the Cape, much of the debris from shipwrecks washed up unharmed, and townsfolk would salvage what they could from the sandy shores. This included a number of nursery stock, from the beach rose, to fruit trees, seeds, and other spoils. The roses spread on their own and were cultivated by humans. Over the years they have naturalized to the environment. Early Coast Guardsmen were known to plant them outside of their life-saving stations on the dunes of the Outer Cape, where the Peaked Hill Bars Historic District’s Dune Shacks now stand.

The next Notable Botanical also came to the region by ship, though in a more deliberate route. The Japanese Pagoda tree that towers at least 78 feet above in Edgartown came to Martha’s Vineyard as a sapling in the hold of a ship in 1837. Captain Thomas Milton is said to have collected the tree on a trip to China, bringing it home in a flowerpot to plant in his front yard on South Water Street. From its seafaring days the sapling has grown…and grown…and grown! According to American Forests’ National Register of Champion Trees, its trunk is 240 inches in circumference and its crown spreads 107 feet! It is the largest of its species in the United States, and at almost 185 years old it is certainly one of the oldest of its kind on the continent. Along with its wide grey trunk, the tree has feathery green leaves, and blooms with fragrant white flowers.

Hidden just off of Route 28 in South Orleans is a living relic. While strolling through the Kenrick Woods you might spot spiky green or brown objects on the ground, about the size of a tennis ball. While they look as if they might be related to an urchin, and have wandered out of the nearest tide pool, they are the pods of American Chestnut seeds.

American Chestnuts once dominated the forests between Maine and Florida. The trees could grow to heights of over 100 feet tall and the USDA reports that trunks often grew over 10 feet in diameter! Across its range, the species provided important habitat for a range of wildlife, and humans also relied on the trees for lumber, chestnuts as a food source for livestock and human consumption. (Think Chestnuts roasting on an open fire…) All this came crashing, almost literally, to the forest floor at the turn of the century with a microscopic fungus, cryphonectria parasitica, which passed along a blight that decimated the trees.

With their wide canopy and stately silhouette, Elm trees have long been favorites for lining streets and providing shade. Like many towns, Nantucket’s streets have long been shaded by the elegant Elms. Unfortunately, like the American Chestnut, the once prominent American Elm has been decimated by disease. Dutch elm disease originated in Europe and was first detected in the United States in the 1930s. The Nantucket Land Council reports that the disease had killed off 77 million trees by the 1980s. The island was fortunate, with its remoteness protecting many of the trees, allowing visitors to the island today to enjoy the shade of many mature trees. In “The Trees of Downtown Nantucket” by the Nantucket Land Council, elms were planted on “nearly every street and at every corner” of downtown Nantucket following the devastation of the great fire of 1846. They report that “Main Street was once enveloped above by a great mass of American elm branches.”

When Dutch elm disease made it to Nantucket, many of the American Elms were replaced with resistant Buisman elms, though they do not grow as tall in the brisk sea winds of the island as the American Elm. Pruning strategies and disease prevention, coupled with a healthy 30 miles of ocean have allowed some of the original elms to survive, and visitors to the island can enjoy the sun dappled shade their canopies provide.

American Chaffseed was listed as a Federally Endangered species in 1992. It hadn’t been seen in Massachusetts since 1965 until it was rediscovered on Cape Cod in 2018!

The herbaceous perennial grows one to two feet tall and produces tall stems with purple/yellow flowers. The species thrives in the sandy grassy plains produced by the nutrient-poor glacial outwash plains common on the Cape. American Chaffseed also relies on disturbances like fire to outcompete other vegetation.

The species is also hemiparatic, or semi-parasitic, meaning that in addition to producing its own food through photosynthesis, it also draws nutrients from a host, in this case by siphoning nourishment from the roots of trees and other nearby plants.