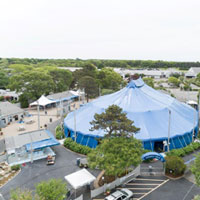 Theatre in the round is a classic entertainment venue, dating back to the ancient Greeks and Romans. The form fell out of favor for years but saw a resurgence in 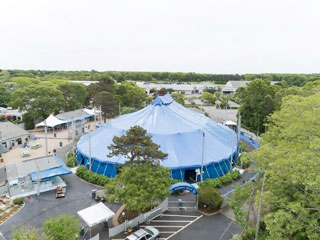 the latter half of the 20th century. In Cape Cod’s Melody Tent the form lives on as one of the two continuously operated tent-theatres-in-the-round in the country! Both the Melody Tent and its sister venue, the South Shore Music Circus in Cohasset, are run by the non-profit South Shore Playhouse Associates.

The venues got their start in 1932 with the Cape Playhouse’s search for additional venue space, finding Cohasset. They had 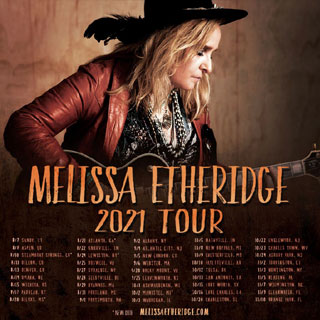 outgrown the venue at the Cohasset Town Hall by 1949, when interest in tent theatres was beginning on the East Coast. The actress Gertrude Lawrence proposed a tent theatre to replace the town hall as a venue. While the South Shore Players in Cohasset weren’t interested at the time, there was interest in Hyannis. In 1950 they opened the Cape Cod Music Circus in Hyannis, followed a year later by a similar venue in Cohasset.

While the local theatre company has been usurped by world class performers on tour, the popularity of both venues continues to this day. These unique venues have always attracted the stars of the day, first those on Broadway and the silver screen, now to world-class music acts and other entertainers! Over the years, performers have ranged from Ginger Rogers, Bob Hope, Dizzy Gillespie, Rosemary Clooney to Carol King, Melissa Etheridge, Alison Krauss, and Union Station, Lynyrd Skynyrd, Willie Nelson, Blues Traveler, The Beach Boys, the Indigo Girls, Ani DiFranco, Aretha Franklin, and more! For a list of upcoming shows and events visit the Melody Tent’s website.

The Hyannis location seats up to 2,300 people, with all the seats no more than 50 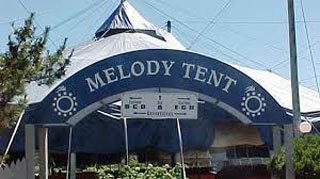 feet from the stage. This type of venue lends itself well to intimate shows, bringing the audience into the same space as the performers. The Melody Tent notes that it feels like you’re hanging out with the bands you’re enjoying! Because it is a tent theatre in New England, both venues are open seasonally, May-September.

Over the years the tents have modernized to include stadium seating, a Cupola venting system, and state of the art lighting and sound systems. When the house is packed the stage rotates, so guests can see all sides of the performance! These days, world class acts stop by the tents on tours, thrilling audiences with a theater tent in the round experience you can’t get anywhere else!