A plethora of unique and fascinating species call the shorelines and waters around Cape Cod, Martha’s Vineyard, Nantucket, and the Elizabeth Islands home. Let’s find out how six of these crazy creatures fit into Cape Cod sea life: 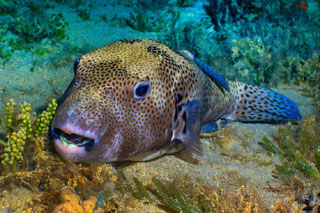 Did you know that there are pufferfish in the waters surrounding Cape Cod and the Islands? Also called ‘blowfish’ and ‘chicken of the sea’ these fun fish can be found up the East Coast. As their name suggests these fish puff up like a balloon as a defense mechanism. The northern pufferfish is not toxic like the Fugu, its Japanese relative, and many folks enjoy eating them.

One of the wildest looking creatures in the Cape’s sea life, the ocean sunfish has been the star of many viral videos and is sometimes mistaken for an injured shark or whale. In October 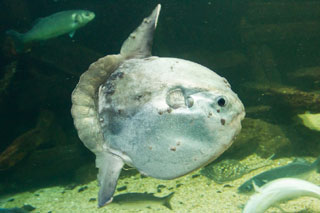 of 2020, the Wareham Department of Natural Resources pleaded with the public to please stop calling the police department about the odd creature near Buzzards Bay! They can be spotted by their fin flopping back and forth on the surface of the water, and their large eyes and open mouth. Their bodies end abruptly, and are flat, often found parallel to the water’s surface. Feeding on jellyfish, the ocean sunfish are one of the heaviest bony fish in the world, National Geographic reports that they can grow up to 11 feet long and weigh in at 2.5 tons! For years they were classified as plankton because it was thought that they did not swim and just drifted with the currents. While in Cape waters, sunfish can become stranded due to cold-stunning, boat collisions, tides, fishing gear, and other factors. 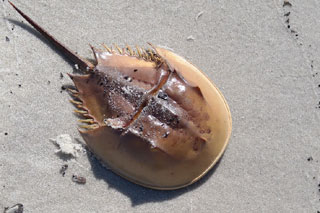 Female horseshoe crabs come ashore on nights in May and June during the high tides that come with full and new moons, spawning on the sandy beaches. These creatures have a prehistoric and almost alien look, and Mass Audubon notes that, “Horseshoe crabs have been crawling ashore on Cape Cod to mate on full moon nights for about 350 million years.” Horseshoe crabs eat worms and bivalves and are in turn eaten by sharks and loggerhead sea turtles. Humans also harvest the horseshoe crabs both for bait and for their blood, which is bright blue and used to produce Limulus amebocyte lysate (LAL). The Parks Service notes, “LAL is the pharmacological standard used to detect fever-causing bacteria in all injectable drugs (i.e., vaccines) and implantable medical devices.” Their populations have been in decline, causing concerns about over-harvesting, and prompting a tagging and tracking program. If you find a horseshoe crab with a tag, please call 1-888-546-8587.

The largest-known species of jellyfish, the Lion’s Mane Jelly can be identified by their maroon/orange blobby body and long 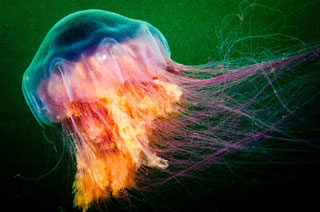 trail of stinging strands. The species has been appearing in Cape Cod’s waters in larger numbers as of late, and in larger sizes. One spotted off of MacMillian Pier in Provincetown last summer was reported to be two feet wide with about ten feet of trailing tentacles. While most of the Lion’s Mane Jellies spotted are dinner plate size, the Provincetown Independant notes that individuals can grow to eight feet across with tentacles two hundred feet long! While scientists are not sure the reason for the bigger and bigger Lion’s Manes’ appearing in New England waters, they caution swimmers and beach goers to not touch the jellyfish or their trailing tentacles as they sting! 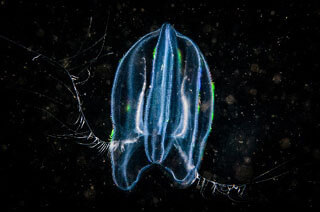 While not technically a jellyfish, ctenophores are commonly called Comb Jelly. CapeCod.com notes that the transparent, gelatinous, blob-like creatures propel themselves through the water using tiny hair-like cilia. Comb Jellies can be distinguished by other jellyfish by their comb like ridges of cilia. On top of their weird and wild shape and structure, comb jellies luminese! The creatures produce a technicolor rainbow, look for them on moonless August nights, brightening the waters with their glow! In addition to the glow of the ctenophores, be on the lookout for blue sparks from bioluminescent plankton lighting up the water like fireflies or twinkling stars beneath the waves. 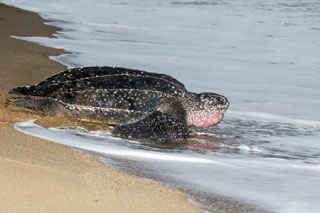 Mass Audubon reports that the endangered leatherback sea turtle is the largest turtle species in the world and the world’s heaviest reptile. Adults average five feet long! Despite its weight, the leatherback turtle’s body is streamlined for swimming, and while it averages speeds of 2 or 3 mph, the turtles can reach speeds of 22 mph on their migration from sandy beaches in South America and the Caribbean to North Atlantic waters. Mass Audubon reports that the leatherbacks are the only species of turtle to visit the Cape’s waters that can produce their own body heat. The other sea turtle species found around the Cape and Islands are ectothermic, or cold-blooded, making them susceptible to cold-stunning when the temperatures drop in the fall.