Skip to content
Home » Blog » All Articles » Cuttyhunk: A Tranquil Get Away in Cape Cod

Cuttyhunk: A Tranquil Get Away in Cape Cod 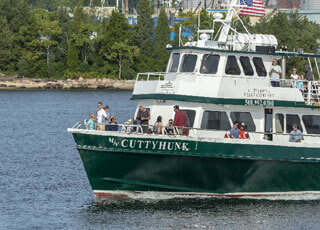 One of the most tranquil places in the Cape Cod and Islands area is the small island of Cuttyhunk off the southwest tip of the Elizabeth Islands. Separated from

the Cape by the other privately owned islands in the string of Elizabeth Islands, Cuttyhunk is accessible by ferry or water taxi from New Bedford on the mainland side to the north and Menemsha on Martha’s Vineyard to the south. Many visitors come by boat. The island’s only town, Gosnold has less than 50 year-round residents. During the summer months, the population can be close to 500.

At nearly one and a half mile by three quarters of a mile wide, the island offers almost 600 acres to explore. A shielded harbor sits on the east end, where visitors from all around arrive on everything from fishing and sail boats to luxury yachts. Gosnold is next to the harbor, with just a few inns, fewer shops, and no liquor stores. Cars, nightlife spots and wi-fi are equally sparse, which is precisely why many people do make the trip to Cuttyhunk. 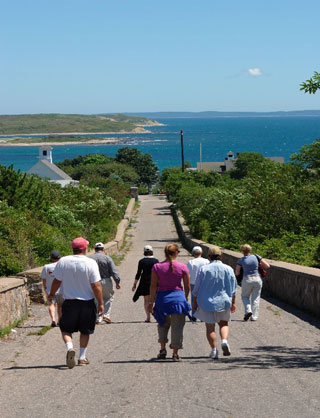 The island is an ideal setting for everything from wedding parties and family reunions to honeymoons or fishing trips. The inns are two former homes turned bed and breakfast, the rustic Fishing Club, and the Avalon. Their quaint and cozy rooms and shared spaces contribute to a camp-like atmosphere. Several houses on the island are also available, mostly for week-long stays. Many visitors, however, spend the night on their boats and explore the island during the day. The market has your basic necessities, food carts and a deli, an ice cream stand serves refreshments, and the fish dock has a raw bar, clam bakes, and fresh catches of fish and lobster for sale. Many services are seasonal, however, so be sure to plan accordingly.

Cuttyhunk – An Island for Outdoors and Nature Lovers

To the west, a large section of the island is a nature preserve with trails open to hiking and bicycling. Three sandy stretches of beach separated by cliffs and rocky 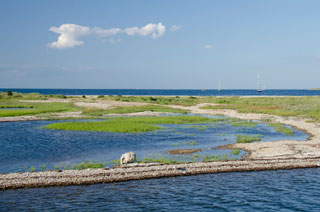 areas line the shores. Stripped-down Coast Guard bunkers from World War II now serve as picnic areas. Nature lovers can spend hours exploring the trails and may even encounter some of the island’s wildlife which includes deer, rabbit, and the occasional coyote as well as plenty of birds for avid birdwatchers to enjoy.

The history of the island is intriguing. The native Wampanoag were its first inhabitants. Then came settlers harvesting sassafras and timber, leaving the island largely barren. The town of Gosnold is named for the explorer who held a settlement on the island in 1602 for less than a month. Later on, island residents would frequently guide merchant and whaling ships through the treacherous reefs in the area on their way to New Bedford, Providence, and Boston. In the 1800s, Cuttyhunk became a retreat for wealthy anglers going after the islands most sought-after prize – record setting striped bass – and wealthy landowners buying property for a summer getaway for their families. In World War II, the bunkers on the island were used to watch for enemy submarines encroaching on the coastline. Now, the island remains a fishing destination and a summer escape.

Regardless of your motivation, getting away from it all or chasing lunkers, Cuttyhunk awaits. Spend your days flyfishing along the shore, combing the beaches for treasures, and taking in the spectacular views or sail into the protected harbor for a peaceful intermission. Be sure to take the opportunity to explore Cuttyhunk during your visit to Cape Cod and the Islands or make it your destination – you will not be disappointed.