Golfing on Martha’s Vineyard and Nantucket

Golfing has a long history on Martha’s Vineyard and Nantucket, with some of the oldest and most lauded courses in the country gracing the islands. The variety of courses makes the area well suited to novices and seasoned players alike. Golfers can enjoy the fresh ocean air, with some courses offering stunning views of the sea and islands, and others coming within a stone’s throw from the shoreline. 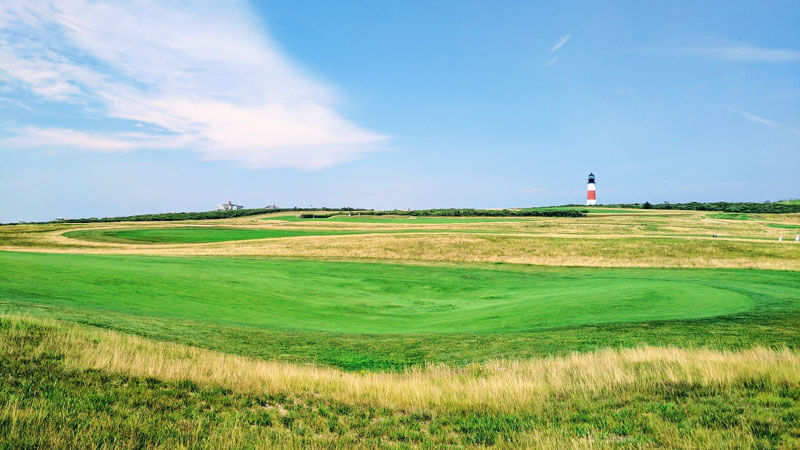 Some of the original golf courses on the islands were maintained by sheep, converted from cattle pasture, and in the case of Mink Meadows on Martha’s Vineyard, made from fire breaks developed to prevent forest fires. Presidents, celebrities, Islanders, Tourists, and summer visitors alike have been known to enjoy the golf courses of Martha’s Vineyard and Nantucket.

While courses are busiest in the summer, many stay open year-round (weather depending) taking advantage of the infrequent snowfall and mild winters on the islands, moderated by the ocean. Regardless of the time of year, Martha’s Vineyard and Nantucket golf courses are an excellent way to take in the sea breeze and explore what the islands have to offer!

The Mink Meadows Golf Club located in West Chop in Vineyard Haven began as fire lanes cut into the forest to slow a potential blaze. In the late 1930’s New York 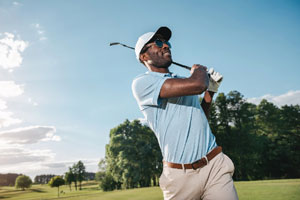 City banker Robert Bigelow came across the fire lanes and only saw fairways. This 9-hole course designed by Wayne Stiles and John Van Kleek provides golfers with a classic seaside course with views of the Vineyard Sound. It has been enjoyed by Presidents and boasts an environmental ethic- both in the maintenance of its turf and its emphasis on wildlife habitat. Mink Meadows was among the first to install osprey poles in the 1970’s to help the endangered species to return to the island. Available to public players and members.

At the Farm Neck Golf Club on Oak Bluffs players can enjoy 18-holes of championship caliber golf while passing through woodlands, meadows, salt marshes, overlooks, and even to the water’s edge. The course, designed by Goeffrey Cornish, Bill Robinson, and Patrick Mulligan, was created in an effort to preserve a corner of Martha’s Vineyard from development, creating a “First class, non-exclusive golf setting for all to enjoy.” It has been described as one of the premier golf experiences in the Northeast and beyond.

The Royal and Ancient Chappaquiddick Links is a somewhat hidden spot, requiring a short trip on the Chappy Ferry. The course updated in 2008 features 9-holes and a lot of character! Founder Frank Marshall discovered a fondness for golf while adventuring in the British Isles and decided to build his own course on Chappaquiddick in 1887, naming it with a nod to St. Andrews in Scotland. A well-kept secret for many years, the Royal and Ancient Chappaquiddick Links are self-described as a “Funky, precious, precocious, funny, and challenging nine holes.” Memberships are available or pay to play with advance arrangements.

PRIVATE- The Vineyard Golf Club in Edgartown is notable as a 100% organic and pesticide free course. Designed as a walking course in 2002 the course sits on 235 acres of preserved land, 2 miles from historic Edgartown.

PRIVATE- The Edgartown Golf Club was founded in 1926 and is known for its historic charms and breathtaking views.

The only public 18-hole course on Nantucket, Miacoment Golf Course features ample fairways and a mix of green sizes, once home to grazing cattle. The link-style course was built in 1963 and expanded in 2003 by Howard Maurer. Known 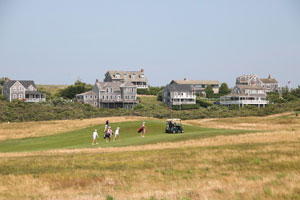 by the Wampanoag word for ‘The Meeting Place’ this course is owned by the Nantucket Island Land Bank and protected from development. Just one mile from the ocean and three miles from town, the course features a putting green, driving range, challenging holes, and unbeatable island views.

The Old ‘Sconset Golf Course was designed by John Grout in 1894 and officially opened in 1899, making it one of the oldest golf courses in the country. The 9-hole course is also known as Skinner’s for the longtime owner/superintendent Robert “Skinner” Coffin. This course provides an old-world golf experience with its converted farmland and farmhouse-turned-clubhouse. The land has been owned and protected by the Nantucket Island Land Bank since 2012 and was named 2020’s “Golf Course of New England” by the New England Golf Course Owners Association.

Private- The Nantucket Golf Club is considered a world class course and is reported to feature one of the highest membership fees in the world. The Historical Society notes that, “The closest tourists and most islanders can get to the course is along the bicycle path to ‘Sconset.”

Private- The Sankaty Head Golf Club is considered a premier links course and features views of Sankaty Head Light in addition to one of the country’s few remaining caddie camps.