River Herring Runs on Cape Cod and the Islands 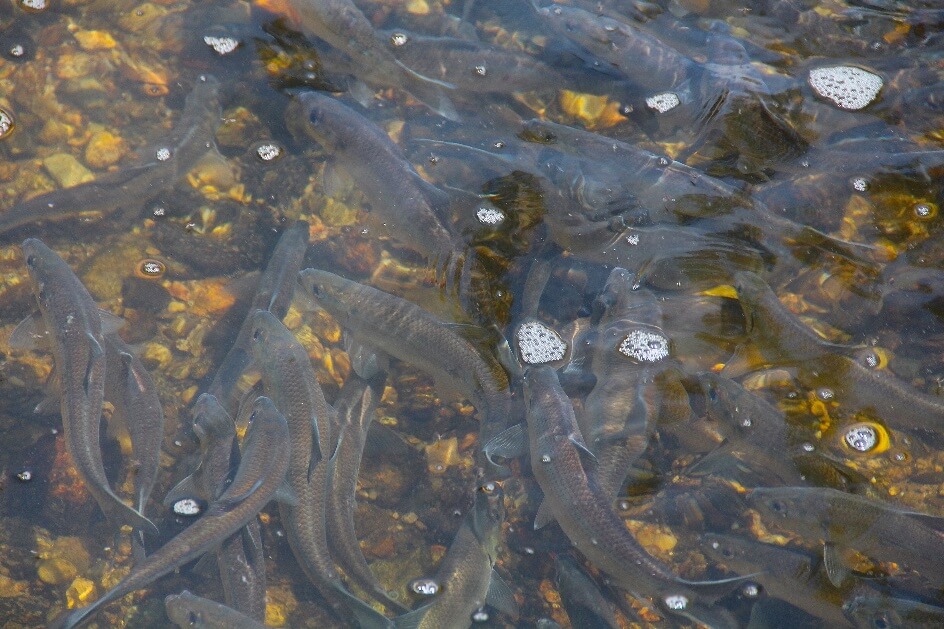 Nothing heralds spring on Cape Cod and the Islands quite like rushing brooks filled with silvery flashes of river herring heading upstream to spawn. Two species,

alewife, and blueback are known collectively as river herring. These fish spend most of their lives in saltwater, swimming in large schools, feeding on plankton, and trying to evade predators like striped bass, cod, tuna, bluefish, seals, whales, and dolphins, venturing into freshwater only to spawn in streams and ponds.

Herring are anadromous, meaning they live most of their lives in salt water but return to fresh water to reproduce. The river herring on Cape Cod and the Islands spend most of their lives in Cape Cod Bay, Nantucket Sound, Pleasant Bay, Vineyard Sound, Buzzards Bay, and the broader Atlantic. The herring runs are a tradition not to be missed and a perfect way to celebrate spring. Enjoy watching the fish fight their way upstream, avoiding gulls and obstacles or get involved as a citizen scientist, collecting data by counting fish.

The spring spawning run marks the turn of the seasons and has long drawn onlookers. The Wampanoag tribe traditionally caught the herring for food and

bait, as did European settlers. According to the U.S. Fish and Wildlife Service, historical accounts report rivers turning silver with fish in the spring. Over the years herring have been used for fertilizer, lobster bait, and as a food source. These days visitors gather to watch the herring use fish ladders to navigate around dams, with volunteers counting the fish to monitor the population size, which has declined significantly in the last several decades.

The herring runs begin in early April, depending on the water temperatures. Mature herring, usually 2-5 years old, depart from their schools in the open ocean, following their olfactory senses to the freshwater in which they were born. Alewives begin their trip upstream when the water temperatures reach 51℉, while Bluebacks wait until the water gets up to 57℉.

Throughout the upstream journey the fish face a gauntlet of predators waiting on the banks of the rivers. Gulls, herons, osprey, river otters and raccoons all wait for the spring herring runs as well, plucking the nutritious fish out of the waterways. The trip is not an easy one; the Association to Preserve Cape Cod notes that 90% of adult herring die while migrating. While herring don’t leap out of the water in the showy way that spawning salmon do, they can swim fast upstream, navigating strong currents, and can make the trip multiple times in their lives.

The river herring’s journey is made more difficult by man-made development including dams, culverts, polluted waters, and increasingly by warming water temperatures. Once the alewives and bluebacks navigate waterways to the pond or late of their choice, the U.S. Fish and Wildlife Service notes that adult females can produce 60,000-300,000 eggs. The eggs hatch in 3-6 days, and the young fish (called fry) spend the summer in freshwater. In the fall, when they are 1 ½ to 2 ½ inches long they head out to sea to join the large schools of herring in the Atlantic. Of all the eggs laid, less than 1% make it back to spawn.

Herring are a crucial part of the fresh and saltwater ecosystems, as a key food source for a variety of recreationally and commercially significant fish species. They are also good indicators for the health of the whole coastal ecosystem. Both of these factors make the decline of herring populations so concerning. The declines, gradual over the last century, and steep in the past few decades, are attributable to dams, development, pollution, and habitat degradation, as well as overfishing and bycatch offshore. Since 2005, there has been a moratorium on fishing for herring, commercially or recreationally in Massachusetts, with the exception of the Wampanoag tribe’s aboriginal fishing rights.

Conservation groups and municipalities have been working to stabilize and increase the population of river herring through a number of initiatives. Improvements have been made by removing barriers to fish passage either by removing old dams, enlarging culverts, or adding fish ladders to help fish navigate around obstacles. The Association to Preserve Cape Cod works with volunteers and scientists to track the number of spawning herring each season. Volunteers help to collect data by counting the fish, either beside the fish ladders or streams, or virtually using underwater cameras. Counting herring is a fun way to get involved in the preservation of this important fish while enjoying the spring herring run!