Welcome to the Town of Eastham

Pilgrims first encountered the land that would become Eastham in November 1620, when the Mayflower became lodged in a large sandbar off its coast. Before the ship hit the sandbar, those aboard the Mayflower were still intent on 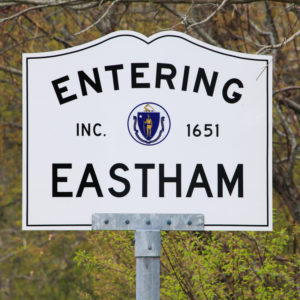 reaching Jamestown, Virginia. By the time a change in wind freed the ship, the captain had decided it was safer for the passengers to settle where they were then to continue sailing through the winter. Those aboard the Mayflower immediately began looking for a suitable place to settle. After landing in Provincetown Harbor, search parties began to explore Cape Cod.

In the early morning of December 7, 1620, a group of Native Americans, most likely from the Nauset Tribe of the Wampanoag Nation, fought with one of these search parties on what would become known as First Encounter Beach. A plaque commemorating this encounter can be found on a rock at the entrance to the bayside beach in Eastham. According to Governor William Bradford, this was the first encounter between European settlers and Native Americans on Cape Cod. There’s evidence that the Wampanoags on the outer cape were trading and fighting with European explorers and fishermen for 200 years prior to the pilgrims! 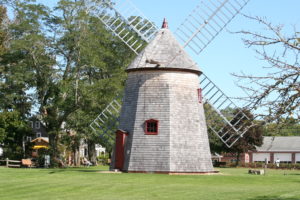 In the eighteenth and nineteenth centuries, the economy of the Outer Cape revolved around farming, fishing, and maritime trade. Many talented sailors hailed from Eastham, including Captain Freeman Hatch, who still holds the world record he set in 1853 for the fastest journey from San Francisco around Cape Horn to Boston in a single-hull wooden sailing vessel.

Eastham is the southern “gate” to Cape Cod National Seashore, a nature preserve that encompasses much of the Outer Cape. Cape Cod National Seashore covers woodlands, salt marshes, and ocean beaches in Eastham and in the surrounding towns. Visitors can explore this expansive preserve on foot, on a bike or all-terrain vehicle, or in a kayak or boat. 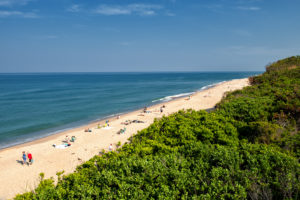 Coast Guard Beach is located in Cape Cod National Seashore, on the east side of the Outer Cape. This beach encompasses the sandy expanse that transcendentalist Henry David Thoreau called the “Great Beach,” along with the Nauset Spit and the Nauset Marsh. The marsh, which low dunes protect from erosion, is a nesting ground for endangered plovers and other birds.

Nauset Light Beach is located just north of Coast Guard Beach. Nauset Light, the iconic lighthouse from the Cape Cod Potato Chips logo, sits on this windswept beach. In 1923, the town of Eastham built the lighthouse using one of two white towers from the Twin Light in Chatham. When painters restored the tower in the 1940s, they added the iconic red stripe.