One of the largest and last undeveloped coastal properties in Cape Cod, visitor-friendly Washburn Island awaits on the shores of Waquoit Bay. The 330-acre 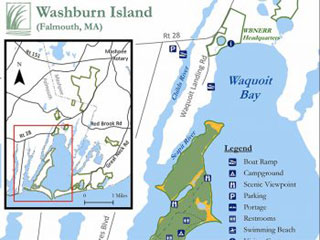 island is part of the 825-acre Waquoit Bay National Estuarine Research Reserve managed by the National Oceanic and Atmospheric Administration (NOAA) and the Massachusetts state park system. Though you’ll need a boat to visit the island, it’s a popular destination for day trippers and overnight campers alike.

Located on the Falmouth side of Waquoit Bay, the island’s beaches, along with South Cape Beach protect the narrow entrance to the bay. Visitors enjoy forests of pitch pine, beaches along Vineyard Sound complete with gently swaying beach grass and fragrant salt spray rose. 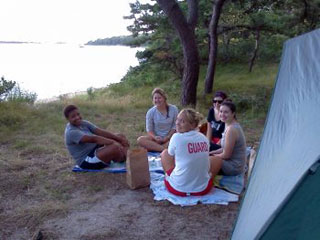 Washburn Island consists of barrier beaches and trails through scrub pine and oak forest and around the marshes and ponds. The island also sports ten primitive campsites available by reservation, though the sites will remain closed for the 2021 season. Nine of the sites are suitable for groups of 4 or less with two tents, and one site can accommodate groups of up to 25 people. Campers and walkers should keep a lookout for the poison ivy and be sure to secure their food from the raccoons that also call the island home.

Island managers stay on the island seasonally, greeting visitors and helping to be sure the campsites are running smoothly. If you’re planning to camp out, be sure to bring your reservation number from the mainland! The Waquoit Bay Reserve has great suggestions on which sites to reserve if you’re looking for seclusion, campsites near one another, and more! On Saturdays in the summer months, you can take a ferry ride to the island and join an interpretive hike hosted by one of the island managers on duty.

The island has had a variety of uses throughout the years. It was home to three farms in the 1850’s when one imagines the grazing sheep and cattle could be spotted from the shores of South Cape Beach. The property was acquired by Henry Bryant in the 1890’s, where he constructed a three-story house and built a hand ferry connecting Washburn Island to the mainland. Following Bryant’s death in 1912 the island was sold to the Washburn family who constructed a home, stable, and boathouse. A fire in 1926 destroyed the home, and the Hurricane of 1938 washed away the causeway the Washburns had built to the mainland.

Following these disasters, the federal government leased the island for amphibious landing training in the 1940’s and built some infrastructure on the island, including a recreation and recovery center. The facilities were demolished following World War II, and the property was returned to the care of Florence Washburn, who allowed locals to recreate on the island.

In 1976 the town of Falmouth passed up an opportunity to buy the island from the Washburns when voters rejected the chance to purchase the island for 2.75 million. This spurred residents to band together to pressure the state to buy Washburn after a developer submitted plans to put luxury homes on the island. The commonwealth acquired the island in 1983 and has incorporated it into the state park system. The island has been staffed seasonally since 1990 and is well worth a trip into Waquoit Bay!