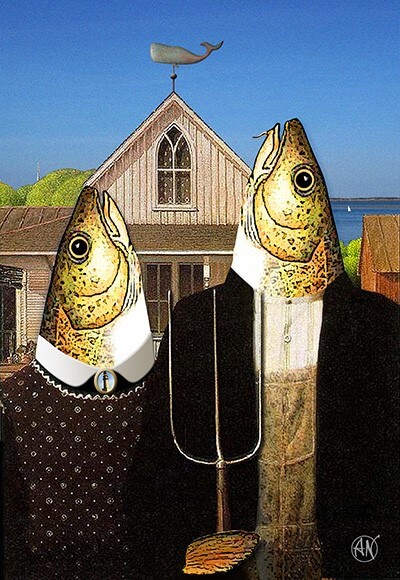 Andrew Newman’s art immediately catches the viewer’s eyes and imagination. His depiction of the codfish in various artistic and humorous contexts, resonates loudly with both locals and visitors, elevating the once lowly fish to a newfound status. In addition to Newman’s “codpieces,” residents can find his innumerable logos, branding identities, and signage that he has created for local businesses and organizations throughout the Cape.

The Start of Andrew Newman’s Career

After earning his degree from the prestigious School of Visual Arts in New York City, he worked for twenty years designing book jackets in the publishing industry. His designs graced the covers for many leading authors such as Carl Hiaasen, Danielle Steele, John Gray, and Elmore Leonard, to name a few. After relocating to Cape Cod, Newman continued to design book covers and jackets while also branching out into branding, corporate identity, logo designs, and web design.

Throughout his design career Newman’s style has been characterized by his meticulous attention to detail, the creation of iconic and stylized letter forms, and a “hands on” approach to every facet of his design ethos. His training and style was old-school, predating the computer era, which gave his designs a strong conceptual look versus graphics generated directly on the computer. His goal when using the computer is to create designs and artworks that don’t look like they were computer generated. His unique sense of style and branding persist today in everything he creates, which sets him apart from many younger contemporary graphic artists.

The evolving innovative technology let Newman work remotely so he could bid the city goodbye and live full time in the Cape Cod area. The Newman family relocated from New York to the Cape in 1993, first to Marstons Mills, and then to Mashpee. In addition to continuing his successful book cover design career, he began acquiring clients on Cape Cod and the surrounding area. Newman’s list of clients includes Jr.Tech, OpenCape, picnic fashion, Mashpee TV, Cape Cod Synagogue, Marstons Mills Library, and the Cotuit Kettleers, just to name a few.

In December of 2007, Andrew Newman took the leap into a more whimsical artistic world, creating his own unique cod designs and illustrations. The first design titled, ‘The Christmas Cod,’ took inspiration from the distinctive speech patterns of the locals. Noticing the way people dropped their ‘r’s’ translated well into card/cod, thus utilizing the local codfish. The ubiquitous cod became his inspiration for his unique Cape Card®, the “Hallmark of Cods.” Locals and visitors alike love Newman’s ‘cods.’ They are simply charming, entertaining, and lighthearted. Each piece is amazingly executed to appear almost lifelike with exceptional detail.

As with any artist, Newman has developed his own recognizable artistic style, clearly displayed in his whimsical Cod line. Newman’s “Cods” have been shown at the following institutions:

Around Cape Cod, Andrew Newman has stayed busy, and when not designing he plays the tuba, trombone, and euphonium. Locally he has played with the Brentwood Brass, Cape Conservatory Jazz Ensemble, Cape Symphony, and the Plymouth Philharmonic. His studies in zoology, art, and music have enabled him to explore so many facets of interest. Having just relocated to California, who knows what his next artistic foray may produce. Stay tuned!

Cape Card® has shops on Etsy and Zazzle, and many more cods can be seen on its Facebook page. 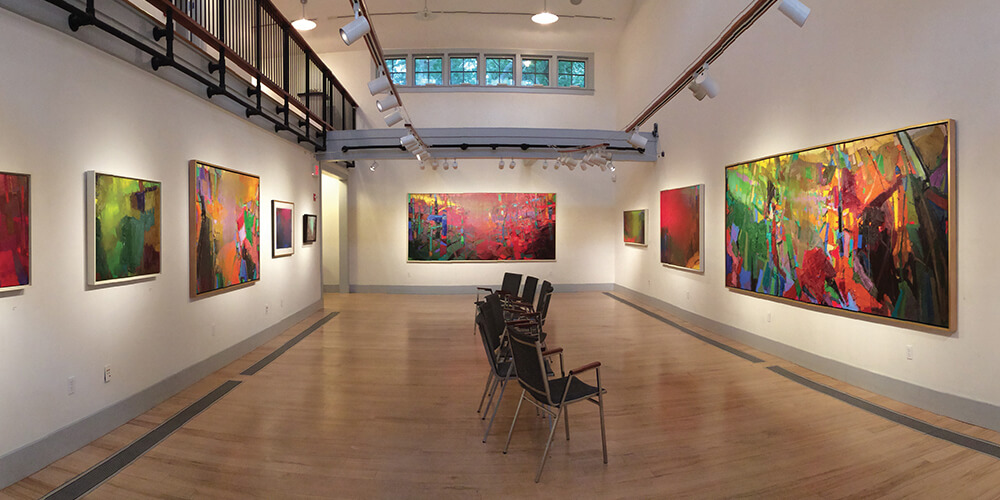 Great Performances at the Cotuit Center for the Arts

The Cotuit Center for the Arts is a cultural hub of the Cape Cod region, offering unique theater performances, gallery