The Birth of Cape Cod 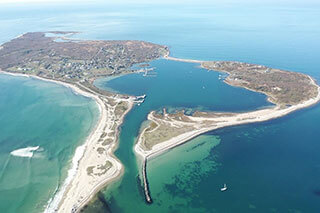 From glaciers to giants, geology and mythology each provide fascinating explanations about the birth of Cape Cod. How was Cape Cod formed? In their comprehensive and entertaining book, “Cape Cod Collected,” local historians Jim Coogan and Jack Sheedy intertwine science and the stories of Cape Cod’s indigenous people to illustrate how this beloved peninsula and the islands beyond her shores were created.

Ice played a significant role in the birth of Cape Cod. Thousands of years ago, mammoth glacial ice sheets formed in Greenland and Labrador moved south, shifting rock and sand and carving out the Cape Cod peninsula, along with Martha’s Vineyard, Nantucket, and the Elizabeth Islands.

A steady stream of locals and tourists drive up and down the Mid-Cape highway from Sandwich to Orleans each year. As they take in the historic charm of Cape Cod’s villages and visit her beaches, clam shacks, and ice cream shops, they may not realize that they are traveling along an ancient geological debris field that arrived with the last ice age almost 10,000 years ago. Unlike the million-year-old rock that forms mainland New England, the bedrock of granite buried by clay, silt, and sand that creates the birth of Cape Cod’s landscape is only 10,000 years old.

As the ice age ended and the earth warmed, the melting ice caused sea levels to rise, and the crashing and receding of the waves against the shore shaped the newly exposed land. Debris left behind by the glaciers was ground into sand over time. The result of the shifting sands migrating and collecting can still be seen today. Most of Provincetown, Barnstable’s Sandy Neck, Nauset Spit in Orleans, and all of Chatham’s Monomoy Island are examples of sand migration caused by the push and pull of the waves.

The Birth of Cape Cod from Indigenous Creation stories

According to Coogan and Sheedy, geologists and mythologists agree that present-day Cape Cod was shaped by giants. The birth of Cape Cod is revealed through stories of giant glaciers and the mythological giants of Wampanoag folklore. The oral traditions and creation stories of Cape Cod’s indigenous people, the Wampanoags, tell the tale of the Great Spirit, Khetean, who created Cape Cod’s lush and bountiful land and water. They also believed that Maushop, a giant whose massive body stretched from Falmouth to Provincetown when he slept, tossed and turned in his sleep creating Cape Cod’s hundreds of kettle ponds. His restless feet carved the Cape’s shoreline, and when he emptied the sand from his moccasins, he is said to have created Nantucket and Martha’s Vineyard. The heavy fog that hangs in the air on Cape Cod mornings? That is the smoke from Maushop’s pipe.

Maushop was an incredibly kind and generous protector. He had five giant sons on whom he relied to do all kinds of things to help care for the Wampanoag people. The local Pukwudgees (wilderness people), a band of little creatures with gray skin, big feet, ears, noses, and fingers, often compared to European trolls and goblins, are said to have grown jealous of Maushop. According to legend, the Pukwudgees were deeply offended because they were not as beloved by humans as Maushop. Fearing retribution from the Pukwudgees, Maushop banished them from Cape Cod and forcefully sent them away across North America.

But the Pukwudgees were clever and vengeful. The little demons grew full of murderous rage and returned to Cape Cod to wreak havoc on humans, Maushop, and his family. One evening while Maushop slept, the Pukwudgees murdered his five sons with their magical powers. The sons were buried off the coast of Woods Hole in graves covered with sand, creating what we now call the Elizabeth Islands.

Granny Squannit, or Tooquahmisquannit, was the wife of Maushop and another being who played a vital role in the creation stories of Cape Cod’s first people. She was petite with webbed fingers and long, tangled hair that covered her face. One of her feet was larger than the other causing her to leave strange and recognizable footprints in the sand along the north-side beaches where she was said to live in a dune cave.

Granny Squannit had a single eye in the middle of her forehead. She could speak to animals and was known to concoct magical potions. Granny Squannit is often associated with the sea and storms. When the weather would churn or become destructive, it was often attributed to arguments she would have with her husband, the giant Maushop.

Many Wampanoag children grew up with tales of the benevolence that Granny Squannit could bestow upon those who were well behaved as well as the threat of her displeasure. Granny Squannit was said to steal naughty children.

Also jealous of her husband Maushop’s power, Granny Squannit struck a deal with a whale, offering it one thousand trout in exchange for stealing Maushop’s pipe. When the whale tricked Granny Squannit and stole the pipe for itself, she lured it back to shore and caused the tide to go out, leaving the whale stranded on the shore. It may be that Granny Squannit is at work to this day when whales are beached along the shore.

The Magic of Science and Saga

It is not surprising that phenomenal science and enchanting saga should each play a role in explaining the birth of Cape Cod. This relatively small peninsula and those who call it home have artfully intertwined all that is magical about the Cape’s natural beauty and its unique cultural history for hundreds of years. Through education, appreciation, and preservation, those who love Cape Cod can become good stewards of her resources and history.