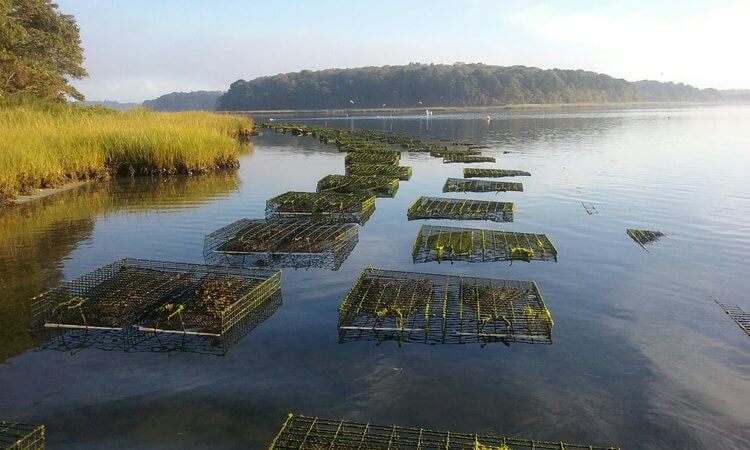 Learn more about how the grant will help improve the Mashpee waterways and offer economic sustainability to the Wampanoag community.

The Wampanoag Tribe has received a $1.1 million grant from the Economic Development Administration (EDA) as part of the Indigenous Communities Program of the American rescue Plan Act. The money intended to assist tribal communities impacted by the pandemic will go towards reviving the First Light Shellfish Farm.

What is the First Light Shellfish Farm?

First Light is a Wampanoag-owned shell fishing farm located in Mashpee. The farm operates on 12 acres of Popponesset Bay under a lease agreement with the town of Mashpee.

The shellfish farm was originally established in 2009 as part of the Popponesset Bay restoration project with the goal of improving water quality through oyster propagation. In 2010, the Wampanoag-owned farm began selling wholesale oysters.

While First Light has been around since 2009, it hasn’t been an easy road. From 2016 to 2020, the Wampanoag tribe was in a legal battle over land rights that greatly hampered economic prosperity.

During this time period, the tribe was barely getting by. However, when the COVID pandemic hit, the tribe wasn’t able to maintain the farm. Without the money to pay a proper workforce, the operation of the farm was extremely limited, resulting in the death of several large populations of shellfish.

However, the EDA grant has brought new life to the farm. The tribe has salvaged what they could from what was leftover pre-pandemic and have big plans for the re-establishment of the shellfish farm.

How Does the First Light Shellfish Farm Help the Environment?

In 2021, a report by the School for Marine Science and Technology out of the University of Massachusetts Dartmouth revealed that the water quality in Popponesset Bay had reached its lowest point.

According to NOAA, one single adult oyster can filter up to 50 liters of water per day. Quahogs, a type of hard oyster, can filter up to 24 gallons of water a day. Along with algae, oysters and quahogs filter harmful materials from the water like nitrogen and phosphorus.

The First Light Shellfish Farm seeded over 800,000 quahogs and 2 million oysters in Popponessett Bay in the Fall of 2022. This huge influx of shellfish is sure to make an impact on the quality of water in the Bay and in Mashpee overall.

How Does the First Light Shellfish Farm Help the Wampanoag Tribe?

While the introduction of oysters and quahogs will be a great benefit for the environment, it also will be a huge economic lift for the Wampanoag. The Shellfish Farm will provide jobs and income and be a source of food for the tribe.

While the shellfish farm was unable to produce much of a profit when it opened in 2010, things are different this time around. The tribe has been granted permission to open its own onsite Hazard Analysis Critical Control Point (HCCP) facility and fish market.

This allows the farm to sell oysters at a higher price point because they won’t have to pay for outside HACCP services. This will allow them to sell directly to consumers and restaurants.

In addition, the HACCP will also allow the tribe to perform these services for commercial fishermen. Allowing them to buy other fisherman’s catch and selling it for a profit. If the plan to restore the First Light Shellfish Farm works out, the Wampanoag tribe will have an environmentally and economically sustainable business to help support the community.