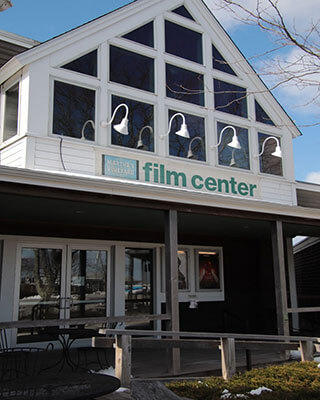 Are you a fan of cinema? If so, then you’ll fall in love with the Martha’s Vineyard Film Society which offers year-round cinema and a host of other activities, making it a hub of entertainment in the cold winter months.

Why not enjoy year-round cinema in Martha’s Vineyard when the island becomes quiet? All winter long, the Film Center will be offering “Dinner and a Movie”, a collaboration with Little House Cafe in Vineyard Haven, who also stays open throughout the off-season. They are supporting each other with the iconic “Dinner and a Movie” promotion through May 1st. If you buy dinner at Little House, you will get a coupon for $3.00 off a movie ticket for that same night — for either for the 4pm (pre-dinner) , or 7:30pm (post dinner) movie at the Film Center.

If opera is more your style for a perfect date night, check out the ongoing Live at the Met series. You can purchase a bundle of tickets for 5 performances of Live at the Met to be shown throughout the winter. A great way to beat the winter blues and join other opera aficionados.

Initially the Martha’s Vineyard Film Society held once a week summer night’s screening of classic films. They would use 16mm projectors and show the movies at the Grange Hall in West Tisbury. The popularity of the endeavor quickly grew and by 2002, weekly programs were launched at the Katharine Cornell Theatre They also provided supplemental screenings across the island at the following locations:

The popularity of the Film Society has exploded from only a handful of volunteers to over 2000 members. Now, since its inception in 1999, they have shown over 900 feature-length and short films.

Throughout the years, the Martha’s Vineyard Film Society has struggled to find a permanent home where they could expand their technical and artistic wings. They would often use the Katharine Cronell Theatre which was not always available in the off-season. Even when they were granted permission to use the establishment, they would still have to set up a projector and sound system for each show. They simply could not deliver high quality sound and image. Also, they were unable to use the DCI (Digital Cinema) so could not bring the Art House films to the area.

In 2015, the Martha’s Vineyard Film Society and the Martha’s Vineyard Theater Foundation became partners. They focus on projects that benefit the entire community. Following the rehab of the Capawock Theatre in Vineyard Haven (opened in 1913) and The Strand Theater in Oak Bluffs (opened in 1915), the Film Society was given the opportunity to operate theaters at the locations when they opened. Unfortunately, when the COVID pandemic hit, they were forced to give up the lease and have still not reopened at the locations.

Nowadays, the Martha’s Vineyard Film Society has even expanded their reach by offering schools and local filmmakers the opportunity to enjoy programing events and specialty films.

Annual Festivals at the Film Center

The Film Society also hosts five exciting festivals each year. The anticipated festivals include the SPECTRUM Film Festival (LGBTQ+S) and the Nature as an Inspiration Festival in May. In June they offer the FILMUSIC Festival. When August arrives, they launch Documentary Week. To end the year, they focus on Women in Film each October.

Each September the crowning jewel of the Film Society is their Martha’s Vineyard International Film Festival.

If you are seeking a lovely evening, why not attend a film at the Film Center? Check out their calendar of coming attractions HERE to book a ticket.