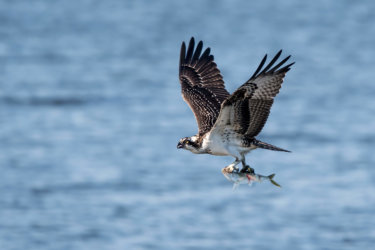 If you’re walking the ocean beaches or the shores of a kettle pond you might spot the distinctive nests of the ospreys on Cape Cod. Also known as fish hawks, ospreys return to the Cape each March, and their presence is a tell tale sign of spring. Ospreys on Cape Cod migrate over 3,000 miles from Central and South America, returning each year to the same nests to lay their eggs and raise their young.

The birds of prey eat primarily fish, and live on every continent except Antarctica. Ospreys on Cape Cod and elsewhere build their nests in high areas like the tops of trees or man-made structures. Ospreys on Cape Cod build their nests from sticks and branches. Since the birds return to their nests each year, and are continually making home improvements, osprey nests can weigh several hundred pounds! The birds themselves are large too, measuring two feet long with wingspans nearing six feet.

Return from the Edge of Extinction

While ospreys on Cape Cod are frequently spotted these days, at one point they did hover on the edge of extinction. The cause was DDT, an insecticide used widely during and after the second World War. While the chemical was used to kill mosquitoes, it did far more. DDT persisted in the environment, and made its way up the food chain. This process, known as biomagnification, meant that the compound accumulated in creatures, like birds of prey, at the top of the food chain.

For bald eagles and ospreys the DDT caused a thinning in their eggshells. This greatly reduced the number of baby birds to survive. By the 1960’s there were fewer than 100 ospreys in all of New England.

Rachel Carson’s Silent Spring, published in 1962, raised the public’s awareness about the use and impacts of DDT. Carson, who had spent an impactful summer in Woods Hole at the Marine Biological Laboratory, changed the course of the environmental movement, and helped to preserve ospreys on Cape Cod and beyond. The publication of Silent Spring led to regional bans of DDT and a federal ban in 1972. It also sparked the establishment of the Environmental Protection Agency in 1970.

Those visiting the Woods Hole scientific community will find a tribute to Rachel Carson, a bench and statue of the scientist, along with her words, “I had my first prolonged contact with the sea at Woods Hole. I never tired of watching the tidal currents pouring through the hole- that wonderful place of whirlpools and eddies and swiftly racing water.”

As the use of DDT ended, the ospreys of Cape Cod rebounded, as did populations of birds of prey elsewhere. Breeding pairs of ospreys in North America now number over 30,000. The heavy stick-filled nests began popping up across the region.

The Harwich Conservation Trust notes that, with the lack of tall trees in the area, ospreys on Cape Cod have turned to human made structures to hold their nests. This includes channel markers, jetties, greenhead fly box traps, utility poles, chimneys, and the platforms made specifically for them.

Some of these nesting locations, especially those on utility poles, pose a danger to the birds and the infrastructure. The birds risk being electrocuted by power lines, and the nests can also catch fire. As a result, Mass Audubon has partnered with local power companies to construct nesting platforms across the Cape. Additionally, Cape and Islands Public Radio reports that a Falmouth boy scout is working to construct nesting platforms for ospreys. They note that osprey nests on telephone poles have caused fires and power outages in the past, so they hope the new platforms will help provide a safe alternative for the returning ospreys on Cape Cod.

Return of the Ospreys on Cape Cod

Cape Cod Osprey Watch tracks the nests of ospreys on Cape Cod season after season, recording which are active, which produce chicks, and showing photos from enthusiastic birders. Visitors and residents can observe the birds hunting for fish, building their nests, and enjoying the waters of the Cape as the parents teach their offspring to hunt in July. The birds will stick around until September, when the ospreys of Cape Cod depart, returning to their winter homes in Central and South America.