Skip to content
Home - The Beautiful Spectacle of Brewster Flats

The Beautiful Spectacle of Brewster Flats 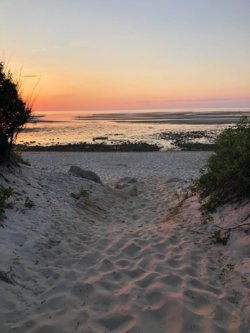 The Brewster Flats of Cape Cod are a must-see, one of a kind natural spectacle. At high tide the area appears to be a fairly normal beach, but as the tides ebb and flow the waters will recede over a mile in distance, revealing otherworldly ripples in the sand, sandbars, tidal pools and oyster beds that are bristling with aquatic life. For anyone visiting Cape Cod, the Brewster Flats are among the necessary sights to visit. At “dead low tide” the flats span about 12,000 acres, extending from Brewster to North Eastham over a roughly 10 mile area. They are the largest flats in North America, providing a unique and uncommon sight that few will ever witness, but one that can be found daily along Cape Cod’s coast.

Brewster Flats are a Local Resource

In the fall months, locals are known to utilize the flats for oystering. Fish, crabs, snails and sea life are easily found in the flats. The large amount of tide pools make them a spectacular place for beachcombers, and people with shellfishing licenses venture into the flats with buckets to take advantage of the unbeatable opportunity for fresh oysters. Brewster is host to several oyster farms, and for the connoisseur, it’s said that the clean bay waters give these shellfish a distinctive and unique flavor.

Your first urge may be to walk out into the great span of beach revealed by the receding waters, but this is not recommended. Tidal creeks are at risk for changing quickly, along with the potential for fog quickly rolling in and turning tides make the flats an unassuming danger to those catch unaware. Generally it is recommended to walk on the beaches alongside the flats, where you can safely take in the unique environment.

Fishermen are also known to utilize the flats, making them more exposed to the potential dangers of this tidal phenomena. Many fishermen have reported stories of getting caught among the flats after not heeding the changing tide. Rapidly changing mud gulleys, rising water levels, and fog rolling in have led to people being caught in the flats during tide changes. It’s also possible to be swept into a rip current if you are caught in the rising tide among the flats. If you are planning to fish in the flats, you should at least bring a personal flotation device, a compass, whistle, watch, and note when tide changes are due, as well as the route you took.

Erosion has taken a notable toll on the beaches and flats in the Cape Cod area. The peninsula has faced rapid erosion for years. The towns near the Brewster Flats have made attempts to curb erosion, but some areas face losses of three to five feet of coastline. Between wind leeching the sand off from the protective dunes to fall and winter storms displacing large amounts of sand, Cape Cod has dealt with heavy erosion more in the past ten to fifteen years than ever before. An example of heavy losses is marked by the beachside Paine’s Creek parking lot. In the 1970s and ‘80s the lot had forty-five spaces, though erosion has whittled the lot down to about ten to fifteen spaces. The town of Brewster recently made an effort to move the lot back by over a hundred feet, and surrounding grasses, dunes, and vegetation had to be reinforced in anticipation of severe erosion. The Town of Orleans attempted to curb erosion problems by using front loaders to replace displaced sand from beaches, but complaints by residents quickly halted the effort.

Counterintuitively, the flats have actually grown in some areas due to erosion. Beaches and areas like the flats on the east end of Brewster have notably risen,

while western areas have lost one or two feet of sand each year. Shore hardening projects have faced the same issues, as jetties, retaining walls, and other efforts may create a beach in some areas, they rob land that would otherwise grow due to down-drifting sands. Accounting for variables like downdrift of eroded soil and sediment makes attempts at reducing erosion much more difficult for local town leaders, but locals are confident that proper planning, long-term perspective, and attempts to stay ahead of the curb can prevent further losses. With ocean levels rising alongside growing amounts of erosion, scientists estimate that environments like this will likely continue to shrink. While that estimate is quite bleak, Cape Cod and the Brewster Flats are estimated to be around for several thousands of years, so if you’re strapped for time you don’t need to worry too much.

The Brewster Flats are a unique natural marvel that few places can compare to. As
the only natural development of its kind in the United States, they are a must see for the
outdoor adventure lover and sightseer. This alien looking environment’s odd ripples and
sand build ups provides a one-of-a-kind perspective of aquatic life. Artists and
photographers have long frequented the Brewster Flats due to the creative opportunities
they offer, and any visitor can appreciate this defining landscape. While they are still
relatively unknown, few areas are as defining of a landscape as Brewster Flats are in Cape
Cod. If you plan to visit the Flats, keep an eye on the tide schedule, avoid walking out
on them if possible, and do your best to appreciate the natural marvel that few can say
they have experienced.