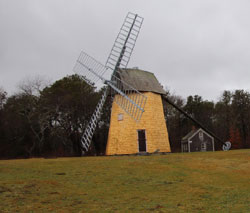 Historically, building windmills on Cape Cod has been ideal due to the consistent ocean breeze. While newer technology has replaced the need for windmills on the Cape, relics of a bygone era still stand for tourists and locals to enjoy.

7 historical windmills that still stand on Cape Cod today include:

Prior to electricity people needed a way to mass-produce common staples like flour and cornmeal without having to spend the entire day milling corn by hand. By attaching sails to the windmills, producers of these goods could harness the power of the wind to do the milling for them. With a consistent breeze coming off the ocean, the Cape Cod shoreline was a strategic location to place these windmills.

One other mass-produced good that was particularly significant to the Cape was salt. Prior to refrigeration, salt was one of the best ways to preserve meat and fish.

Initially, the colonists imported salt. However, during the Revolutionary War, the British blockaded trade routes, preventing colonists from importing goods. They turned to windmills to power saltwater pumps, which could then process saltwater into salt. Without this technology, the colonists would have been without important sources of protein during the winter months.

While windmills aren’t commonly used today, several remaining historical windmills still stand along the Cape Cod coast to remind us of their importance in history.

The Old Mill is a 50-foot-high windmill constructed by Nathan Wilbur in 1746. While the mill has gone in and out of use over the course of history, it still works today. It is known to be the oldest functioning windmill still in it’s original location in the United States.

The Old Mill is open every Thursday and Friday from 11 am – 4 pm during the tourist season. While the mill is operable, they only will use it when wind and weather conditions permit. If you’d like to see the mill in operation check out this video.

The Judah Baker Windmill was built in 1791 in South Dennis. It was moved several times before landing in its current location of South Yarmouth.

The windmill is open to visitors from Memorial Day Weekend through Columbus Day Weekend. Hours vary, so you should reach out to the Town of Yarmouth Visitor Center for current hours.

If you don’t mind not going inside of it, the Judah Baker Windmill is exceptionally picturesque against a snowy background.

Located in Drummer Boy Park, the Higgins Farm Windmill was built in 1795. While the windmill was originally located in East Brewster, the windmill was moved several times until it arrived at its present location in 1890 to serve as a clubhouse for the Nickerson’s private golf course.

You can visit the Higgins Farm Windmill Thursday-Saturday from the end of June through the end of August.

The Chatham Windmill was built by Colonel Benjamin Godfrey in 1797. The windmill was comprised of three floors with the top two floors being used for the typical purpose of grinding wheat and corn.

The bottom floor was uniquely used as a corncob grinder, that would break up the cobs so that they could be used as animal feed.

The Chatham Windmill was fully restored in 2012. Millers stand at the ready to show tourists the windmill in operation Mondays, Wednesdays, and Fridays July 2nd through September 3rd.

The Jonathan Young Windmill was built in the early 1700s. The windmill is rather unique in that it still has all of its early parts and machinery intact. It was originally located in South Orleans but was relocated to the more advantageous and picturesque location of the town park by 1839.

You can visit the windmill any time that you would like; however, you aren’t able to go inside of it.

The Eastham Windmill was built in Plymouth in 1680, moved to Truro in 1770, and then finally to Eastham in 1793. The windmill is known to be the oldest and last functioning gristmill on the main island of Cape Cod.

As long as the weather cooperates, you can visit the Eastham Windmill from 9 am – 1 pm Friday through Sunday.

The Old East Mill was built in 1800 using leftover materials of the Congregational meeting House in Orleans. Ownership of the mill was shared, but it was operated by a man named Isaac snow.

Like most of the windmills on our list, the Old East Mill moved locations several times before reaching its current location inside the Heritage Museums and Gardens. The outside of the mill was renovated in 2019 in order to preserve this historic landmark for years to come.

While Cape Cod Lighthouses often capture the attention of tourists and locals, it’s well worth the time to go visit a few of the historical windmills on Cape Cod.

The historical significance of some of these windmills is intriguing in itself, but several of the windmills still in operation today are located on high, picturesque points for optimal functionality. You surely won’t regret taking the time to visit a few of these beautiful locations while learning a thing or two about milling.