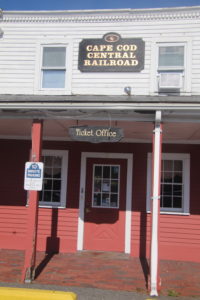 passing through West Barnstable and Sandwich and crossing over the Cape Cod Canal on the way. As it travels up the coast, the train whisks passengers through secluded salt marshes, windy sand dunes, and untouched coastline that’s only accessible by rail. Hop on the Cape Cod Central Railroad to enjoy narrated shoreline excursions, brunches, dinners, and other special events.

The first train arrived in Cape Cod in 1848, when the Cape Cod Branch Railroad opened a freight line between the town of Middleborough and the bustling industrial city of Sandwich. This first train shipped materials to and from the Boston and Sandwich Glass Company in Sandwich. Soon after, the Cape Cod Railroad, the Old Colony Railroad, and the New Haven Railroad began running passenger trains between towns in Massachusetts and towns on the Cape. 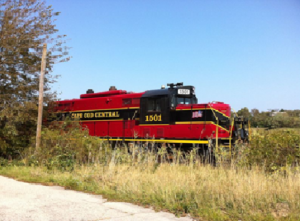 By the late 1880s, a network of rail lines connected almost every town on the Cape. When the Cape Cod Canal opened in 1914, engineers built a bascule bridge across the waterway. In 1935, engineers replaced this bridge with the Cape Cod Canal Railway Bridge, a vertical lift bridge with a overhead clearance of up to 135 feet. The Cape Cod Central Railroad crosses over this historic bridge at the end of its journey from Hyannis to Buzzards Bay.

By the 1960s, however, most passenger trains had ceased operations on Cape Cod. Much of the railway infrastructure on the Cape was lost to fires and new development over the years, but passengers can still see a number of historic railway buildings from the Cape Cod Central Railroad. These buildings include the West Barnstable Station and the Buzzards Bay Control Tower, both built in 1911, along with the Gray Gables Station, which was built in 1892. 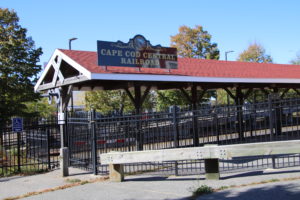 The Cape Cod Central Railroad, as it operates today, opened in 1999. The rail line traces the path that many late eighteenth- and early nineteenth-century trains took between the “Capital of the Cape” and mainland Massachusetts. For visitors interested in the ecology and history of the Cape, a trip on the Cape Cod Central Railroad brings the Cape’s thriving industrial period to life.