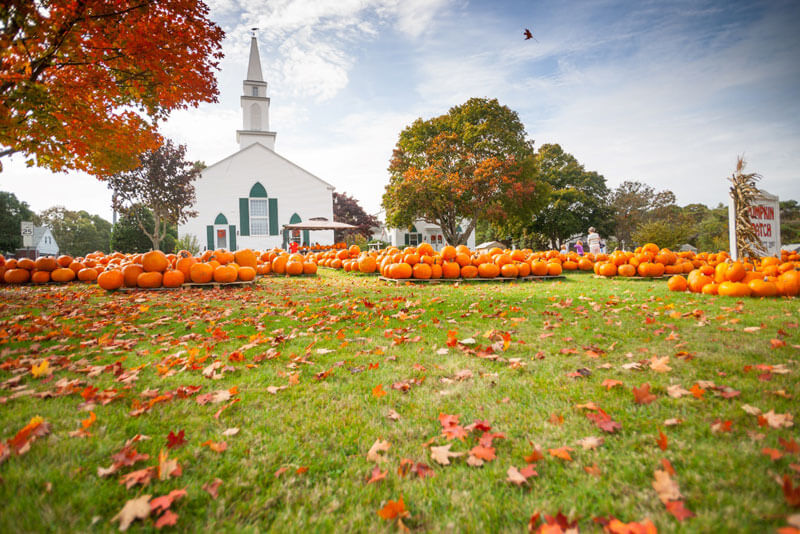 As the leaves fall and the winds pick up, you might be wondering what there is to do on Cape Cod for Halloween! Don’t worry, we’ve got you

covered with a collection of spooky spots across Cape Cod and fun events to get you in the Cape Cod Halloween spirit!

Halloween can come any time of the year with the number of hauntings, historical sites and stories, and spooky spots to visit on Cape Cod and the Islands, though there’s something about the rattle of crunchy leaves, dark nights, and fogbound coastlines that makes fall the perfect time for a little fright!

If the things that go bump in the night are a little too spooky for you, there are also plenty of family-friendly ways to celebrate a Cape Cod Halloween.

On the Outer Cape, within the bounds of the Cape Cod National Seashore sites the abandoned North Truro Air Force Station. The station was

constructed in 1948 as a part of the Air Defense Command radar network. After years of operating as a radar station, the site was home to Operation Have Horn in 1969. During this period sounding rockets from project Nike Hydac were launched from the stie. As the Cold War came to an end in 1994 the Air Force ceased its operations at the North Truro base. Much of the land was transferred to the Parks Service, with many falling into a haunting disrepair.

The Parks Service is working to remove the buildings as funding is available. While many of the derelict buildings have been vandalized, some of the facility is being converted into the Highlands Center, with the goal of providing a performing arts space, area for scientific research, and other facilities to support the National Seashore. The site now houses the Payomet Performing Arts Center.

While the Highlands Center rises from the ashes of the former Air Force base, the site still has a ghost town quality, and is well worth an exploration, especially in this spooky season! Step back into an overgrown neighborhood, greenery almost obscuring the rows of houses and military buildings. In some of the houses, green vines twine over kitchen cabinets and cupboards, and ceilings have giveaway, making rough skylights in the decaying structures. Explore with caution, as many of the buildings are home to asbestos and other concerning chemicals and may be structurally unstable!

A favorite of local ghost hunters, The Barnstable House was originally located in Scituate and relocated to its spot off of Old King’s Highway in

1716. The stately colonial house, now home to law offices, is also said to be the “House of 11 Ghosts” and has been featured on Ghost Hunters and visited by lots of paranormal enthusiasts over the years.

The house was built atop an underground river, which in the days before indoor plumbing provided an easy source of running water. This feature of convenience is said to be the site of one of the house’s tragedies. A young girl named Lucy Paine is said to have been chasing a ball around the house, when she tragically drowned in the underground river. Some believe that Lucy never left, and still roams the house and nearby Barnstable Restaurant and Tavern, looking for people to play with her.

After the Revolutionary War a past owner of the house, Edumnd Howes, is said to have hanged himself in a tree just outside the house after losing all of his money when the currency changed. Folks have reported seeing his silhouette through upstairs windows, inhabiting a sealed attic.

A grouchy sea captain known as Grey or Graves is also known to slam doors and make his sour disposition known to visitors. A number of other presences have been felt in the Barnstable House, making a stroll past the home a must for a Cape Cod Halloween in Barnstable!

The Captain Linnell House, located on Skaket Beach Road in Orleans, was built as the home of Captain Ebenezer Linnell in 1840. On his travels, the

captain visited Marselles, France in 1850 and was inspired by what he saw there. Upon his return he outfitted the family home with French furnishings. In 1864 Captain Ebenezer was sailing off the coast of Brazil and was caught up in a storm. While the ship was tossed to and fro in the swells of the storm Captain Ebenezer was tossed into the ship’s wheel, killing him. The captain was buried at sea, and word of his death was sent to his wife Rebecca.

Rebecca Linnel was devastated by the news, and is said to have clutched the letter tight, waiting for 60 years for her husband to return. She would often climb to the cupola of the house, gazing at the rolling waves, waiting for a sign of Ebenezer’s return. Some say she’s still waiting, and have seen a figure gazing from the cupola out to sea… Perhaps it’s worth a Cape Cod Halloween wander to see if you spot a figure at the top of the house.

The house first opened as a restaurant in the 1950’s, and after a stint of disrepair was opened in 1988 as a beloved restaurant and wedding venue. The venue operated until last year when the pandemic made operations too challenging. It was recently sold and will return to use as a residential property.

The Dillingham House was constructed in 1659, and was the home of Edward Dillingham, one of Sandwich’s founding fathers. In the 1800’s one

of Edward Dillingham’s descendants Branch Dillingham was living in the home with his wife and nine children. In 1813 Branch Dillman committed suicide, and his wife died weeks later. The children were left alone in the house, fending for themselves as orphans.

In the 1930’s and 40’s the house was rundown and served as a boarding house. In the late 1970’s rumors began swirling about strange occurrences at the Dillingham House. There were reports of flashing lights, doors unlatching themselves, and empty chairs rocking themselves. There have also been tales of small feet pattering up and down hallways, which some believe are the spirits of the nine Dillingham children from so many years ago. A police report filed in 1979 on the mysterious happenings noted that the experiences seemed to spike around Halloween!

Stop by the Cape Cod Museum of Natural History in Brewster on October 30th from 9:30 am to 1:00 pm for a celebration of a family fun Cape Cod Halloween! There’s limited admission at the door, so it’s recommended that you make reservations in advance. Tickets at $6 per person. Activities include making “goos and brews,” games and puzzles, Firefly painting, an Aquarium treat trail, and a visit to the Owl’s Nest! If you show up in a Halloween costume, you’ll get a coupon for the Science Shop. And if you’re hungry the Local Scoop will be around with ice cream and grilled cheese!

On Halloween night at 5 pm don’t miss Falmouth’s Neighborhood Halloween Parade. The event happens on Frederick B Douglass Road and is a fun way to get dressed up and trick-or-treat!

Swing by the Harwich Community Center on October 29th for a fun drive-thru trick or treat event! Don’t forget your costumes, but don’t worry, you won’t need to get out of the car! The event begins at 5:30 pm and will go until all the goodie bags have been handed out!

On October 26th, at 10:30 am the Brewster Ladies Library Association will be putting on an Outdoor Halloween Storytime Celebration. Come to the event in your costume and enjoy the free Halloween bags that will be given out. Don’t forget your mask as well! The event is weather dependent, as it will feature a march around the perimeter of the library and some spooky music. Don’t forget to bring a blanket or chair to sit on for the Storytime portion of the event!

Head up the coast to Plymouth for A Historically Spooky Halloween at the Plimoth Patuxet Museums. The event runs on October 29th and October 30th from 5:30-7:30 pm. Come in costume for what they describe as a “cozy fall evening packed with family fun!” The paths are lit by pumpkins and lanterns, and parents can stay toasty by a fire while kids enjoy historic-inspired games. Kids will head home with a gift bag.

Swing by Gould Park in Chatham anytime from October 15th to October 31st to enjoy the Pumpkin People in the Park. Gone are the whales of the summer, it’s now time for the pumpkin people! The pumpkins are designed and sponsored by local businesses, organizations, and local folks. Enjoy this fun and creative celebration of the season!

Wear your costume to the Mashpee Commons for some Cape Cod Halloween fun on October 30th from 12 to 5 pm! Trick or treat at the shops in the Mashpee Commons, participate in the costume contest, and “Pawrade” featuring kids and pups at Hot Diggity! Enjoy a Thriller Dance by the New England Ballet Theatre on Steeple Street at 12:15 and 12:30. There’s also an Instagram Photo Contest, food, and music, and lots more! While you’re visiting the commons, consider contributing to the Fall Food Drive to benefit the Family Pantry of Cape Cod at Rory’s Market.

Stop by the West Falmouth Library on October 30th at 1:30 pm for Halloween Story Time! Costumes are encouraged and the event will feature a story, songs, and crafts!

Stop by the Atwood Museum in Chatham on October 30th from 1 to 4 pm for a great event filled with ghosts, ghouls, witches, and children! Trick-or-treat through the museum galleries and decorate pumpkins and play games on the front lawn! The event is free and open to the public, though reservations are needed.