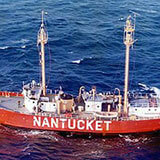 Cape Cod is beloved for its 559 miles of pristine coastline. While the Cape is an idyllic vacation destination, as captured in so many watercolor paintings of pink sunsets, beach roses, and the shimmering sea, there is a darker, treacherous side to her shoreline – and it’s not the sharks.

For centuries, raging nor’easters churned the ocean. Relentless erosion and shifting sandbars triggered more than 3,000 shipwrecks and thousands of deaths off the coast of Cape Cod. And for centuries, Cape Cod lightships and lifesaving stations were served by robust and courageous individuals who kept watch from the sea and the shore, risking their lives to rescue shipwrecked sailors from the frigid, angry water of the Atlantic to provide shelter and safety. They were known as guardians of the ocean’s graveyard.

What was a Cape Cod Lightship?

Cape Cod lightships and lightsaving stations saved thousands of lives over nearly a century. A lightship is essentially a floating lighthouse. Lightships were outfitted with a beacon and patrolled areas with hazardous shoals to warn other boats and vessels at night or in overcast and unfavorable conditions. Lightships were used where the geography was too challenging to construct a lighthouse or where the waters were too deep. In the early days, lightship crews rang bells and lit whale oil lanterns to warn passing ships of danger. As technology progressed, horns replaced bells, and electric lamps replaced oil lanterns.

A fleet of lightships patrolled the shoals around Cape Cod from the mid-nineteenth century to the mid-twentieth century. According to Jack Sheedy and Jim Coogan’s fascinating book, Cape Cod Companion, The History and Mystery of Old Cape Cod, the ships’ crews had stretches of endless (often dull) time on their hands punctuated by terrifying moments of sheer peril amidst stormy seas.

In the winter, it was not uncommon for lightships to be trapped by ice for days and ripped from their moorings. In 1918 one lightship was dragged by ice floe from the coast of the Cape all the way to Long Island.

Lightships were often at risk of colliding with the larger vessels they hoped to protect. In May of 1934, the Titanic’s sister ship, the Olympia, was blinded by foggy conditions while making a transatlantic run and rammed the Nantucket Lightship #7. The 1,000 lb. lightship was no match for the 45,000-ton Olympia. Only the captain and three of his crew survived. Seven others perished. Still, their glowing beacons played a crucial role in protecting ships. One Cape Cod lightship tallied 500 passing vessels in 24 hours.

Boredom provided the catalyst for the creation of Nantucket’s famous Lightship Baskets. Sailors aboard the Nantucket Shoals lightship, deployed for 30 days at a time, often had very little to do. Lightship sailors passed the time creating baskets as gifts for their wives and sweethearts. The original “lightship” baskets were multi-purpose and used for shopping or storage. In the 1900s, the baskets gained popularity among tourists, and women began to use them as purses. Today, they have become both a collector’s item and a status symbol. Authentic lighthouse baskets range in price from $500 to hundreds of thousands of dollars and have become an iconic symbol of Nantucket’s history and maritime culture.

For hundreds of years, sailing ships were at the heart of the supply chain. Goods, food, coal, and lumber were transported north and south along the eastern seaboard from Boston to New York and beyond. Before the construction of the Cape Cod Canal in 1914, sailing vessels had no option but to navigate the dangerous waters surrounding Cape Cod and the islands. The constant shifting of sandbars and the erosion of the shoreline, especially from Chatham to the Outer Cape, made navigating the trip deadly.

Shipwrecks became such a frequent occurrence – twice a month during the winter months of the 19th century, that the Massachusetts Humane Society built huts along the most hazardous coastline area every five miles from Monomoy to Provincetown to aid survivors. Shipwreck survivors would often make it to shore but succumb to hypothermia and exposure without adequate shelter. Volunteer patrols would keep an eye out for distressed ships and sailors and help them to safety in the huts. The work proved too challenging for inexperienced volunteers. Without sufficient funding, the program dissolved, and the huts fell into disrepair.

In 1872, the United States government allocated funds for a new program, The United States Lifesaving Service (USLSS). Nine lifesaving stations were constructed every five miles along the coast of the Outer Cape. Operating these lifesaving stations, and patrolling the beaches for signs of ships in trouble, were teams of 6-7 paid surfmen under the direction of a station keeper. Anyone who has visited the Outer Cape Atlantic-facing beaches in the winter or on the eve of a brewing storm will find it difficult to imagine the brutal nature of this work.

The keeper kept watch from the lifesaving station while the surfmen took four-hour shifts walking the beaches. Every night regardless of season, hurricane, nor’easter, or blizzard, the surfmen walked the five-mile distance between their station and the next, then back for four hours until another surfman relieved them. If a surfman sighted a wreck, he would ignite a flare to signal the ship that help was on its way.

If the wreck were far from shore, the men would need to drag a 24-foot-long, 1,000-pound boat across miles of sand and down the dunes in pitch darkness – often compounded by wind, rain, or snow. Then, launch the boat into the monstrous winter surf, swirling with fierce undertows. At any time, the rescue boat could capsize, the crewman could be tossed into the dark water and lost, or gigantic waves could crush the surfboat against the bulk of the wrecked vessel. It was extraordinary and heroic work. In his book Surfmen and Lifesavers, Paul Giambarba states that between 1872 and 1915, US lifesaving station patrols saved ninety-nine percent of all those involved in shipwrecks along the coastlines of the country.

Are There Still US Lifesaving Stations on Cape Cod?

The construction of the canal, and the development of safer propeller-driven, steel-hulled ships drastically reduced the number of shipwrecks along the Outer Cape. In 1915, the US Lifesaving Service merged with the Revenue Marine Bureau (aka the Revenue Cutter Service) to become the US Coast Guard. While there are no longer working Lifesaving Stations on Cape Cod, the only building still in existence that has not been altered is located at Race Point Beach in Provincetown. Race Point was never a US lifesaving station location, but Chatham’s Old Harbor Station, built in 1858, was moved to Race Point in 1977. Now part of the Lifesaving Museum, visitors can tour the Old Harbor Lifesaving Station to imagine better what life was like for the Cape Cod surfmen and keepers.

Fans of Cahoon Hollow’s Wellfleet Beachcomber may be surprised to learn that the very first US Lifesaving Station on Cape Cod was constructed at Cahoon Hollow and rebuilt after a devastating fire in 1897. That building, with its spectacular view, and its own annual battle against the elements of Mother Nature and beach erosion, houses one of Cape Cod’s most popular bars and restaurants.

The last US Lightship was decommissioned in 1985. While Cape Cod Lightships and Lifesaving stations no longer protect ships and sailors at sea, the spirit of their crews, surfmen, and keepers who braved the elements and dedicated themselves to the safety of others has shaped the culture of Cape Cod. Their bravery and legacy have inspired new generations of Cape Codders to serve their community.