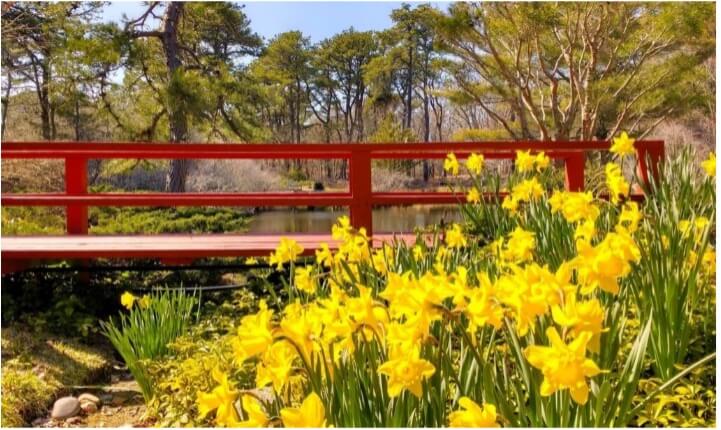 The Mytoi Gardens boast 14 acres of elegant Japanese-inspired gardens on Chappaquiddick Island. Just a short ferry ride away from Martha’s Vineyard, the property is managed by the Trustees of the Reservation and is a wonderful spot for quiet contemplation. The gardens feature both native and exotic plants, and surround a serene pond where turtles, frogs, and goldfish can be found.

Destruction and rebirth of the Mytoi Gardens

The garden was developed in the 1950’s and 60’s but was decimated by Hurricane Bob in 1991. From there the garden had a rebirth and an elegant new garden was designed by Julie Moir Masservy and Kinsaku Nakane and created by Don Sibley.

The design was influenced by Japanese gardens, but the creators are quick to point out that this is a Martha’s Vineyard garden at heart. Nestled within a pine forest, the gardens are meant for strolling, with narrow passageways leading to open spaces. With plenty of benches and bridges crossing babbling brooks, it’s a place to slow down and pay attention.

The Mytoi Gardens, just off of Dike Road, host a number of events and tours throughout the year, and a late June visit will yield plenty of rhododendron and azalea blooms. Be warned, the mosquitoes and ticks can be thick during certain seasons!

More to see on Chappaquiddick Island

On your way back from the Mytoi Gardens, don’t miss a chance to see the largest Japanese Pagoda Tree in the United States. The tree arrived in the hold of a ship in 1837 has been growing on Water Street in Edgartown ever since.

To visit the gardens either walk or bike the three miles from the Chappy Ferry, or drive. Be aware that the parking lot only holds 15 cars, so visiting early in the morning or in the late afternoon is the best way to get a spot.

Just down the road from the gardens the Cape Poge Wildlife Refuge is located on a skinny strip of barrier beach separating Cape Poge Bay and the waters of Nantucket Sound. The 516-acre refuge includes sand, saltmarshes, a salt pond, weathered red cedars and a lighthouse on the eastern edge of Chappy, running from Wasque Point north, curling west past Cape Poge Lighthouse to the Gut.

The same strong currents that formed this barrier beach also provide nutrient rich waters for striped bass, bluefish, bonito, and albacore. The area is a haven for birders and features a gull rookery, nesting sites for the endangered piping plovers, as well as terns and oystercatchers.

The cedars that have managed to eke out an existence on this spit of sand are worn, weathered, and a century old!  As well as being a favorite spot for oversand vehicles, the refuge sports 14 miles of moderate hiking and walking trails and beachfront.

The 1801 lighthouse was built to warn sailors of the shoals and shallows that dot the Muskeget Channel between Chappaquiddick and the small islands off of Nantucket’s western shore.

On the northernmost tip of the barrier beach, the light’s exposed location allows sailors to spot it’s beam 9 miles out to sea but has also caused problems for the structure. Twice the light has collapsed,

brought down by shifting sands and storms. It was rebuilt in 1844, and again in 1893. The 1893 structure, a 63-foot-tall white tower with a bright red door still stands today. The Trustees manage the lighthouse property, while the Coast Guard maintains the light itself.

The unique spit of land is worth exploring, either on foot or with a permit for an oversand vehicle. Parking can be found on the town side of Dike Bridge, or just up the road at Mytoi Gardens. During the summer season (May-October) admission is $5 for adults.  Entry is free November-April and for Trustee’s members and children 15 & under.