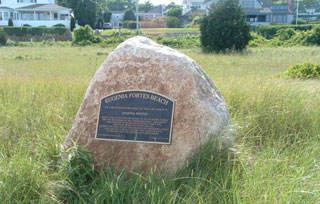 If you’re visiting Hyannisport, perhaps trying to glimpse the Kennedy compound or checking out the unique Holbrook Water Tower, you may find your

way to Eugenia Fortes Beach. The stretch of sand, vegetation, and calm water is a good beach for strolling, with the sand interspersed with seashells and the protected water lapping serenely at the shoreline.

While the small beach is quiet, it holds a big place in history. As you walk the beach you may notice a plaque on a large piece of stone, surrounded by swaying grasses. The stone is the same as that used on JFK’s gravestone in Arlington. The plaque at Eugenia Fortes Beach reads:

The Town of Barnstable dedicates this public beach to Eugenia Fortes whose tireless efforts on behalf of all residents earned her the reputation as the ‘town watchdog’ her ability and courage to speak where others dared not preserved rights of access for all. Eugenia’s decades of vigilance in town of Barnstable public matters will forever teach us the value of good citizenship and the meaning of human rights.

Eugenia Fortes was born in 1911 on Brava, the smallest of the Cape Verde Islands, located about 350 miles off the western coast of Africa. At the age of 9, Fortes joined her father who had traveled to America. She settled into Whaling City, New Bedford, Massachusetts. Many Cape Verdeans came to the region by way of the whaling industry. The Cape Cod Times also reports that, “In the early and mid-1800’s, Cape Verdeans– taught by Wampanoag people– owned and worked their own cranberry bogs and

picked all kinds of berries on Cape Cod.”

By 1928, Eugenia Fortes had made her way to Hyannis. She worked at the artificial pearl company for a time and then became a housekeeper for 27 years. In 1957 she became a cook at a local school until her retirement. Eugenia Fortes’ life was shaped by her activism and the racial discrimination she faced at a young age. A series of interviews with The History Makers: The Digital Repository for the Black Experience from August of 2004, just before the Eugenia Fortes Beach was dedicated, shed light onto Fortes’ formative years.

After cranberry season was over, Eugenia Fortes went to Boston looking for work to supplement her family’s income for the winter. She went to the Y to rent a room for a week but was turned away for the color of her skin. Seeing the desperation on Fortes’ face, the people at the front desk sent Fortes to a house on Holyoke Street called the Harriet Tubman House, who took her in. Soon after in 1936 Eugenia joined the Boston chapter of the NAACP. She worked to recruit more members on the Cape.

In 1945 a young woman who Eugenia Fortes had roomed with at the Tubman House on Holyoke Street came to visit her on the Cape. Marie Anderson, a pianist from Ohio was excited to be on the Cape and like so many of us today, couldn’t wait to hit the beach!

The two girls headed out to East Beach in Hyannisport, leaning up against one side of the pier and enjoying the day. The beach wasn’t crowded, with just another woman and a police officer on the sand. As Eugenia recalled to The History Makers, “And then about a half hour later, this policeman came over. He said, “I’m sorry, colored sits on the other side.” And I said, “They do?” He said, “Yes,” he said, “You’ll have to move.” I said, “Since when?” I said, “This is a public beach.” And he looked at me said, “I didn’t know you lived here.” I said, “I do.” And do you know I stayed on that damn beach til 5:30 that afternoon. I would not move. So, I was long before Rosa Parks.” The next year, an association was attempting to purchase and privatize the beach. Eugenia Fortes stood up at the town meeting and told her story. She recalled, “And I think they’ve believed me ever since, I don’t lie.” In 2004 East Beach became Eugenia Fortes Beach, a public beach.

Eugenia Fortes’ activism didn’t stop with her efforts to desegregate the beaches. She rented her cottage to Justice Thurgood Marshall, recalled a 1955 visit to the Cape from Rev. Martin Luther

King, Jr., and greeted the Freedom Riders on their trip though Hyannis. In 1961 she founded a Cape Cod chapter of the NAACP. Fortes also fought for the poor. She sent food and clothing to impoverish communities in the Mississippi River Delta for 25 years through the Mississippi Box Project. She was on the civil rights commission for 14 years and received a number of awards for her civil rights work and advocacy. Fortes was also on the Hyannis Library Board of Directors for 40 years. She passed away in 2006 at the age of 94. Some of her personal belongings and more information about her life and legacy can be found at the Zion Union Heritage Museum in Hyannis.

Tucked away in a residential neighborhood, Eugenia Fortes Beach is quiet and calm. The small boardwalk stretches out into Hyannis Harbor. It has limited parking and requires resident or daily parking stickers. The shells on the sand mean that shoes are advised if you’re planning to go in the water. Otherwise, grab a book or a beach umbrella and enjoy all the beauty and meaning to be found at Eugenia Fortes Beach.