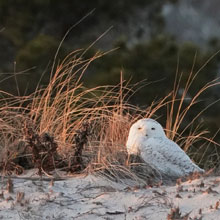 Some of the most noticeable migratory birds of Cape Cod include:

In this article, we will take a look at the migration pattern of each bird as well as some of the best locations to see migratory birds on Cape Cod.

While migratory patterns are almost impossible to pinpoint to an exact day, we will take a look at the general time frame as to when the migratory birds travel South and when they start heading back to the Cape.

The Ruby-Throated Hummingbirds are one of Cape Cod’s smallest birds and are a favorite amongst casual observers and bird enthusiasts alike. That distinctive hum of the tiny birds is a welcome sound in many Cape Cod gardens each season.

Male hummingbirds are the first to return to the Cape. They arrive back in Cape Cod around mid to late spring usually towards the tail end of May.The males are also the first to head south in the fall, typically leaving for the Gulf Coast, or as far as Central or South America around mid-September.

Hummingbirds love bright colors, and love a range of flowers. Experts recommend putting out a hummingbird feeder in the spring, around the last week of April or first week of May.

Anyone who has spent time on Cape Cod during the summer has surely noticed areas on the beaches closed for Piping Plover nesting. These shorebirds are an endangered species and migrate every year.

Piping plovers typically migrate South between August and mid-September. They typically travel to North Carolina or Florida but have been seen as far south as the Bahamas. They tend to come back to the cape in mid-Spring between April and May.

Hawks are majestic birds and are most commonly seen in the Outer Cape near Provincetown. The best time for hawk-watching is in the Spring, so grab your binoculars!

Hawks spend the majority of the year on the Cape. They have a late migration in comparison to some of the other birds on this list, not leaving South until October and November. They make their way back North as early as February and are almost always back by early March.

Mass Audubon runs an annual bird count in partnership with Eastern Massachusetts Hawk Watch, monitoring the spring migration from Pilgrim Heights in Truro. The count, running since 1998, runs from early March through June.

Bluebirds are unique on Cape Cod in that some of them actually stay put year-round. This is in part due to a concerted effort by the Cape Cod Bird Club to install Bluebird boxes throughout the Cape.

The majority of Bluebirds living on the Cape migrate south in October with some waiting until November depending on the year. However, they come back to the Cape as early as mid-March.

Mourning Doves are another bird that has learned to call Cape Cod home year-round. Those that do stay live off the birdhouses and feed that is graciously put out by the Cape Cod residents year-round.

Those that still migrate South are usually gone by the end of October. However, they head back in late March with almost all of them arriving by the end of June. You can hear the distinctive coo-ing of this species on calm spring mornings on the Cape.

Ospreys have been a staple along the Cape Cod coast for years. While they were almost gone from the Cape in the 1970s, the population has rebounded thanks to concerted conservation efforts.

Ospreys typically leave Cape Cod in September, but you can look for them to return in early March. While you’re traveling the Cape be sure to keep your eyes peeled for the large nests made by ospreys. They can be spotted in chimneys, in trees, and in specially designed nesting platforms.

Those of you who can’t wait for the spring migration season should keep an eye out for the snowy owls. These birds migrate South from the Arctic Circle to the “warmer” weather on Cape Cod. Their white plumage is a festive and fun sight, and they are a sure sign of winter on the Cape.

In contrast to other migratory birds on Cape Cod, Snow owls arrive on the Cape in mid-November and tend to head back north in the middle of April.

Where are the Best Places to Birdwatch on Cape Cod?

Sandy Neck Beach in Barnstable is not only a beautiful place to relax in the summer, but also one of the best places on the Cape to birdwatch.

With over 243 different species of birds, you’ll be certain to see a lot of activity on early spring mornings. This is a particularly popular nesting location for shorebirds, so keep an eye out for the Piping Plovers. The small birds can be spotted along the water’s edge, scurrying in and out with the advance of the foamy waves.

The Monomoy National Wildlife Refuge in Chatham is another great place on the Cape to see shorebirds.

With over 40 species of sandpipers and plovers, you’ll be sure to get your fill of beautiful birds running up and down the shoreline.

Cape Cod is a great place for birdwatchers because the shore quickly turns into a dense forest. Taking a trip to Fort Hill in Eastham allows you to see a unique combination of shorebirds and other types of birds living in harmony.

This is a great place to see warblers and flycatchers, as well as the occasional hawk circling high above looking for prey.

In just 5 miles of trails in the Wellfleet Bay Wildlife Sanctuary, you’ll come across a pond, a salt marsh, a barrier beach, and pine woodlands. This range of habitats is home to over 300 different species of birds.

While Green Herons and Orchard Orioles may steal the show, keep an eye out for the tiny Ruby-Throated Hummingbirds here as well.

Head out to the Outer Cape in Truro to climb the sandy dunes and get a sight of some of the 250 species of birds that call this place home.

While the gray and white Mississippi Kite is the main attraction here, you may also be able to catch a hawk or two in the spring.

Cape Cod is a birdwatcher’s paradise. With a huge range of diversity of habitats in such a small span, the birds attracted to the Cape could keep any birdwatcher satisfied for years.

With the spring nesting season fast approaching, it’s time to take out those binoculars, break out your field journal, and hit the trails!