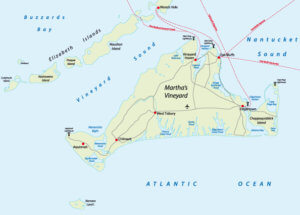 About 3 miles off the coast of Martha’s Vineyard in the Atlantic Ocean lies the uninhabited island of Nomans Land. In an area where real estate is highly coveted, why does such a prime location remain barren?

Nomans island was used by the Navy as a practice bombing range. Despite clean-up efforts, several undetonated bombs still remain on the island. In the absence of human intervention, wildlife has flourished, and the island remains closed to the public.

In this article, we will take a look at the history of the island, its current state, and plans for the future of the island.

Nomans Land or No Man’s Land?

Since the island is uninhabited one might think that the island has been appropriately named “no man’s land”; however, the name Nomans land actually has historical roots back to when the island had occupants.

It is believed that the name came from the Wampanoag Sachem (high chief) Tequenoman. Teque “noman” was in charge of the island when the colonists first arrived. While ownership of the island has changed several times since then, the name Noman seems to have stuck.

The History of Nomans Land

The first known inhabitants of Nomans Land were the Wampanoag. Upon the arrival of the colonists, the island was taken over and passed through a wide array of owners throughout the colonial period.

An Airbase in the Atlantic

During the early 20th century, the island was owned by the Crane family and most people were unaware of the island outside of Massachusetts.

However, World War II changed the course of the island’s history forever. In 1942, the United States Navy identified the island as an ideal location for an airbase. The Crane family lent their land to the US Navy and construction of the base began promptly.

After the war the Navy no longer had use for an airbase in this location; however, the Crane’s didn’t have much use for an island with an airbase on it either. They sold the island to the US Navy in 1952.

Since the island was no longer needed to house an airbase, the Navy started using it as a bombing range in 1954. This started Nomans Land long period of being uninhabited.

Since the island was detached from the mainland and was uninhabited it made the perfect place to use as a training ground for Navy bombers. From 1954 through 1992 the Navy performed countless training exercises using the island for target practice.

The Navy stopped using the island in 1992 due to the environmental impact. They attempted to clean up the island to make it safe for the public; however, 50 years of bombing exercises left too many bombs for them to be 100% certain of removing all undetonated explosives.

Despite almost 30 years of inactivity, the island has still been determined to be unsafe for the public. While the island is considered to be part of the town of Chilmark, it is currently under the control of the Department of the Interior.

The island remains stuck in time. In the aftermath of 50 years of the bombing still lies the wreckage of world war era homes and even Wampanoag burial grounds. The allure of the island has been too much for a few brave locals; however, anyone found on the island is removed and fined.

A New Home for Wildlife

Since the island has been uninhabited for so long, quite a few birds have made it their new home. While it’s mostly used as a stopping point for birds migrating to the Gulf of Mexico and the Caribbean, its remoteness has made it a preferred location for quite a few species.

Some commonly found species on the island include northern harriers, roseate terns, and oystercatchers. There have even been rare sightings of the endangered piping plovers.

How do people know what species are living on this island? Well, the Fish & Wildlife Service makes about 6 trips per year out to the island to study and record the wildlife. An uninhabited island makes for a great opportunity to study animal activity undisturbed by human intervention.

With the help of Google maps and aerial footage, the island has been photographed and recorded on several occasions. You can see beautiful footage of the island by watching this video created by the Green Mountain Film Company.

What is the Future of Noman Island?

As you can imagine, a 652-acre uninhabited island right off the coast of Martha’s Vineyard has been the subject of a lot of debate. Can we leave the island as a natural habitat or is the prime real estate opportunity too much to pass up?

However, what becomes of the island once it is cleaned up? Undeveloped land right near Martha’s Vineyard is sure to be a gold mine for any real estate company. However, the potential for contaminated soil and exposure to chemicals makes it unclear if humans would be able to live on the island, even if all the bombs were removed.

On the other hand, the island has now become a home for wildlife. With the island allowing for the preservation of endangered animals and a home free of human disturbances, is it ethical to develop it?

Is it even the United States’ land to decide what to do with? History is clear that the Wampanoag people lived there long before it was used as a bombing range. There are reports of burial grounds still surviving on the island. If it is able to be made inhabitable, should it be given back to the Wampanoag?

While there seems to be an understanding that there is a need for us as humans to right our own wrongs and make the island livable again, there is little consensus on what should happen to Nomans Land after the imminent clean up. Only time will tell if nature scientists, ambitious developers, and the Wampanoag descendants can reach an agreement.