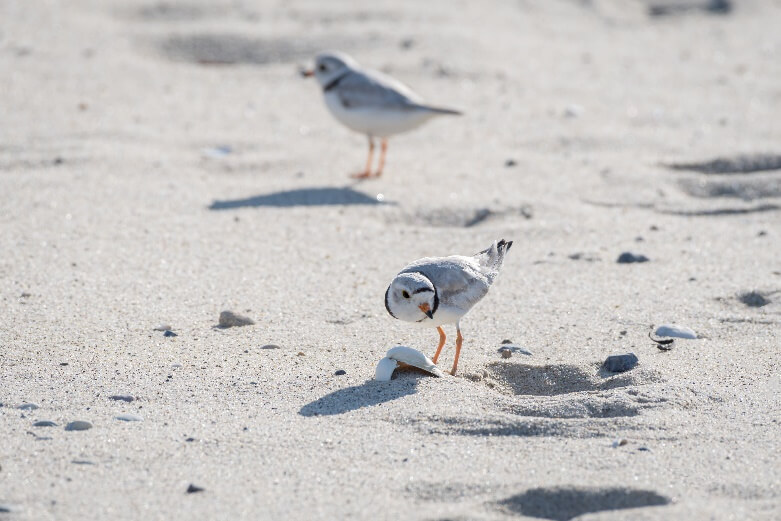 As the weather warms up, visitors and locals alike are flocking to beaches on the Cape and Islands. A walk down sandy shorelines will reveal that

another species has flocked to the beaches as well, the tiny and endangered piping plover.

The plovers are a small shore bird that blends in well along sandy and rocky shorelines and can be spotted running in short bursts, often pattering away incoming surf where they forage for insects, crustaceans, and worms. Piping plovers can be found from North Carolina to Newfoundland, and raise their young on the sandy beaches of the Cape and Islands. The plovers return each year in late March or April, breeding and laying their eggs in sandy nests.

Once the eggs hatch the fluffy young birds are vulnerable to predators, and rely on their camouflage to protect themselves, while their parents try to

distract the intruder, mimicking a broken wing. Once they hatch the birds take a month to learn to fly. In the fall the birds migrate south, wintering in southern states, the Bahamas and West Indies.

The National Parks Service notes that the species declined in the 19th century due to hunting, recovered following the Migratory Bird Treaty Act of 1918, but has declined following the end of World War II due to a number of threats. Coastal development has decreased the available habitat, storm surges can wash out nests, small mammals hunt the eggs and young birds, human disturbance can harm the species, and dogs can harass or kill the birds.

Numerous efforts are underway to preserve and protect the piping plover populations. Fish and Wildlife Service estimates from 2019 show that Massachusetts is leading New England, and all other regions tallied, with 743 breeding pairs of piping plovers.

Beachgoers will note signage and closed sections of beach informing visitors about efforts to support this species. There is sometimes a thorny relationship from beachgoers and this little bird. Off-road vehicles and pets are sometimes banned from beaches for a few months while the plovers are nesting and raising their young. It’s important to read signage and do your research on the beach you’re planning

to visit to be sure you’re well informed.

Other steps you can take to protect the piping plovers include sticking close to the water when walking on the beach, giving the birds you see plenty of space, carrying out your trash and food scraps, and educating others about this unique species that shares the beaches with us!

A number of beaches are closed to pets during the piping plover nesting season, and it’s important for this endangered species that these restrictions are followed. Fines can also result if the restrictions are not followed! For specific closure information on the Cape Cod National Seashore visit the Parks Service website and for other Cape and Island beaches be sure to check with local municipalities.