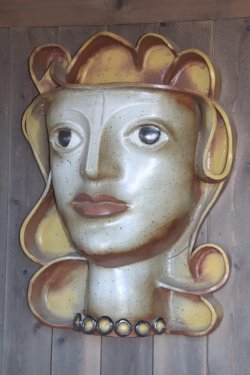 The history of visual art on Cape Cod reaches back to roughly 1899, when the painter Charles Webster Hawthorne opened the Cape Cod School of Art in Provincetown. As soon as it opened, artists from all over the United States began coming to the summer school in Provincetown to study Hawthorne’s unique style of impressionist painting en plein air.

The next year, painter E. Ambrose Webster opened his own art school, the Summer School of Painting, in Provincetown. Webster, who was an early pioneer of modernism, brought experimental painters like Charles Darby, Fritz Fuglister, and Kenneth Stubbs to the Outer Cape. Soon, Provincetown was the most important modernist art colony in the United States.

When World War I broke out in Europe, many expatriate modernists living in Paris returned to the United States and took up residence in Provincetown. These artists, and other modernists, invigorated the art scene on Cape. Their contributions include the unique method of white-line woodcut printing used by the cubist painters Agnes Weinrich and Blanche Lazzell.

In the 1930s, the artists Henry Hensche and Hans Hofmann opened two new summer schools in Provincetown. These schools, which respectively taught impressionism en plein air and abstract modernism, shaped the local art scene for decades to come. In the 1930s-1950s, this thriving scene brought celebrated artists like Edward Hopper, Jackson Pollock, and Mark Rothko to the Cape.

Throughout the twentieth century, the Outer Cape played a central role in the development of modern art in the United States. Today, Cape Cod’s art museums and galleries keep the traditions of visual art on Cape Cod alive with exhibits that often pay homage to the area’s natural landscape and modernist history.

Addison Art Gallery (Orleans) exhibits the work of contemporary artists who are, often, inspired by the modernism that defined the twentieth-century art scene on Cape Cod. The ongoing exhibit “After Hopper,” is a collection of contemporary paintings inspired by one of the Cape’s most iconic resident painters.

Cahoon Museum of American Art (Cotuit) exhibits a large permanent collection of American art, including both fine art and folk art, from the nineteenth century through today. The collection includes pieces by influential members of the Provincetown Art Colony, such as Edna Choate Hodgkins, Daisy Margaret Hughes, and Margaret Jordan Patterson.

Cape Cod Museum of Art (Dennis) “preserves the work of the Cape’s finest artists and celebrates the distinctive artistic identity of the Cape, the Islands, and the region.” Its permanent collection includes the work of Charles Hawthorne, Henry Hensche, R. H. Ives Gammell, and Hans Hofmann, who were instrumental in developing the Provincetown Art Colony..

Chapman Art Gallery (Cotuit, Mashpee) features the work of contemporary painters from, mostly, New England. Many of the gallery’s exhibits pay homage to the natural landscapes of Cape Cod and the American Northeast. See more.

Left Bank Art Gallery (Wellfleet, Orleans) is a lively commercial gallery that sells paintings made in many mediums, including oils, acrylics, encaustics, and watercolors, as well as drawings, photographs, and sculptures. The gallery also focuses on everyday pieces of art, like home furnishings, jewelry, and fashion.

Provincetown Art Association and Museum (Provincetown) was founded in 1914 by painters Charles Hawthorne, Oscar Gieberich, William Halsall, Gerrit Beneker, and E. Ambrose Webster, along with several businesspeople in the area. Today, its exhibits include historical and contemporary works that span a variety of movements, including those that defined the local art scene: impressionism, modernism, and abstract expressionism.

From Sandwich to Provincetown, the rich history of visual art on Cape Cod can be found in the many galleries that still exist today, supporting local artists while also paying homage to the masters of the past.