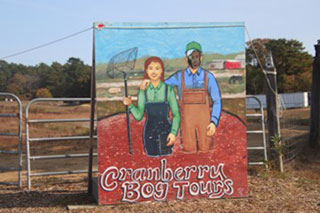 While tourists may flock to Cape Cod to enjoy her pristine shoreline and historic seaside charm, millions worldwide enjoy a taste of Cape Cod each day right at their kitchen table. Cape Cod’s cash crop, the cranberry, is a beloved staple in salads, sauces, bread, desserts, and cocktails. Cranberries are Massachusetts’ second-largest agricultural commodity, worth about $60 million, and the industry generates more than $1 billion for Massachusetts and about 7,000 jobs.

What is the History of Cranberry Cultivation on Cape Cod?

According to the Cape Cod Cranberry Growers Association, receding glaciers tens of thousands of years ago left cavities in the earth that evolved into cranberry bogs. Cranberry vines require a unique layering of highly acidic peat, clay, gravel, and sand and a fresh water supply to thrive. Cape Cod’s many kettle ponds provide the ideal environment. The Wampanoag people of Southeastern MA have been cultivating and consuming these red tart berries (sasumuneash) for more than 12,000 years. When the English came in 1620, native Americans taught them to use the berry for food, medicine, and as a dye. The settlers were familiar with the cranberry which grew in the lowland bogs of England and the Netherlands. They called them “crane berries” because their pink flowers resemble the head and neck of the sandhill crane.

Captain Henry Hall, a revolutionary war veteran, and resident of Dennis, MA, was the first to cultivate the cranberry on Cape Cod. He noticed that the wild cranberry vines on his property produced more fruit on the years that sand blew into the bogs and covered the plants. Captain Hall began to transplant vines and covered them with sand, a technique that quickly spread among other local growers and is still practiced today.

“Sanding” is the most commonly used cultivation technique in the cranberry production in Massachusetts. Applying a thin layer of sand over cranberry bogs every two to five years promotes growth, improves productivity, suppresses disease, and reduces insect populations. By 1900, the industry was booming; local farmers converted thousands of acres of wetland into bogs across Barnstable county. The industry was so vital that schoolchildren were dismissed from school for two weeks each year to help with the cranberry harvest. The Cape Cod cranberry had become a household name.

Is the Cranberry indigenous to North America?

The cranberry is one of the very few fruits indigenous to North America. Raspberries, concord grapes, huckleberries, and American persimmons are others. Cranberries grew in such abundance in the 1600s that many historians believe cranberries likely appeared on the menu for the first Thanksgiving. One thing we do know is that there was no cranberry sauce or jelly. The Pilgrims depleted their sugar reserves, crossing the Atlantic from England. Cooks did not begin to boil cranberries with sugar for another 50 years. The canned jellied sauce (with the lines) vs. fresh debate would not start until 1912 when local growers Marcus Urann and Elizabeth Lee concocted the popular condiment as a way to use up bruised berries. Americans consume 40 million pounds of cranberries annually, 20% of which is purchased the week of Thanksgiving.

Are There Still Working Bogs on Cape Cod?

Yes! While Cape Cod’s cash crop – cranberries, continue to grow here on Cape Cod, only 10% of the state’s yield is grown here. Many Cape Cod bogs are over 100 years old. They are nestled into kettle ponds and nooks and crannies of winding wetlands that make the bogs more challenging to harvest. The vines were planted to accommodate the old wooden cranberry scoops and rakes, not machines. The Midwest cranberry growers in Michigan and Wisconsin and Canadian farmers constructed their commercial bogs with neat, linear boundaries; modern machinery makes short work of harvest.

There are several working bogs on the Cape, and many offer tours. The Cakounes family in Harwich runs Cape Cod’s largest organic cranberry bog located in Harwich. Tours are offered 7-days a week in the spring, summer, and fall. Visitors can take a guided ride through the bog while learning about the vital role of bees, irrigation, equipment, and relentless work required to produce organic berries.

A grower with over 35 years of experience leads each Cape Cod Cranberry Bog Tour in Sandwich. It is wise to make a reservation. Depending on availability and weather, tours take place throughout the growing and harvesting season. Visitors should know that this is a walking tour – so dress for the weather and wear appropriate footwear. It is best to call at least 24 hours in advance to discuss availability and locations.

In 1994, Annie Walker, the owner of Annie’s Crannies, started cultivating cranberries to continue a family tradition that began with her grandfather, Ben Walker. Annie’s Crannies, located in Dennis Village, where Cape Cod cranberry cultivation began, hosts tours during the harvest season during October and November. In addition to the cranberry bog tour, Annie’s Crannies tours also feature information on honey and candles made from cranberry blossoms. These items are sold on the premises as well.

The AD Makepeace cranberry company claims to be the largest cranberry grower in the world. They are dedicated to environmental sustainability and offer tours and events throughout the growing season. AD Makepeace only uses wet harvesting to collect cranberries from the bog. This harvesting method uses water reels (nick-named egg beaters) to jostle the berries from the vine so that they float on top of the water that growers use to flood the bogs for harvest.

How Are Cranberries Harvested?

Water harvesting creates the iconic, stunning sea of crimson floating berries that are gathered with wooden or plastic “booms.” This photo-op moment featuring workers dressed in waders, surrounded by a sea of floating berries, happens one or two days a year. It is a spectacular image if you are lucky enough to see it. The berries are placed in bins and lifted out of the bogs. Helicopters are often used to lift the containers, protecting the vines from trampling.

Berries collected through wet harvesting are only used for juices, sauces, or other processed foods. Dry harvesting is also done by machine but is less damaging to the berry, leaving it glossy and ready for market.

Protecting the Future of the Cranberry, The University of Massachusetts Cranberry Station

The cranberry industry is a valuable contributor to the economy and character of Southeastern Massachusetts. The UMASS Cranberry Station, Wareham created in 1910, is an outreach and research center dedicated to protecting the viability and sustainability of the cranberry industry in Massachusetts. Because the land surrounding cranberry bogs accounts for much of the open space in the area, the water quality and protection programs researched and implemented by the UMASS Cranberry Station will ultimately protect and preserve all of Cape Cod’s unique natural beauty for generations to come.

Cape Cod’s cranberry bogs are beautiful to behold all year long. This holiday season, when you sit down to dinner or enjoy a Cape Codder or Cosmo with friends, thank a cranberry grower. And this summer, when you are enjoying Cape Cod’s other famous delicacies like oysters and striped bass, remember that on Cape Cod,  the cranberry has played a principal role in the culinary and agricultural history of Cape Cod for hundreds of years.