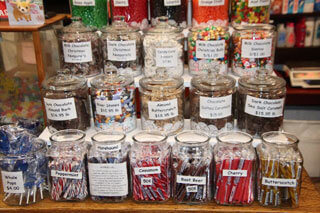 There is something unique about the charm of old country stores on Cape Cod. The stores remind us of a simpler time and add to the unique feel of the quaint New England towns.

8 of our favorite old country stores on Cape Cod include:

Each of these 8 old country stores offers a unique experience and adds to the charm of Cape Cod. In this article, we will take a look at what makes each store so special.

The building that houses The Brewster Store was built in 1852 by the Universalist Society as a two-story church. Apparently, the congregation didn’t do so well as the church was sold to William W. Knowles in 1866 for $1. Knowles made some renovations and converted it to the general store that Cape Cod tourists and locals know and love.

The store has its own line of merchandise along with all the toys, candy, food, jams, and jellies you would expect from a country store. Rather uniquely, they have oil lamps and parts for sale in the store as well.

While the store is open year-round, they also have an ice cream shop called the Brewster Scoop that is only open during the tourist season.

While the store was renovated in 2021, you still get the old charm to feel as soon as you step through the front door. While visiting the store is a fun experience in itself, as “dealers in almost everything” you’re also sure to find anything you need while shopping there.

Fancy’s Market in Osterville is a 176-year-old store that was built in 1839 by Captain Harvey Scudder and his brother. While ownership has changed several times throughout the years, Fancy’s has been a steadfast landmark of Osterville and officially was added to the National Register of Historic Places in 1987.

Fancy’s Market is much more than just a general store. It has its own deli and even offers catering. In addition to the foodservice, it’s also a grocery store and beer and wine shop.

Cotuit Market is another combination of general store and take-out food service that has been serving Cape Cod since the 1800s. They have a wide array of sandwiches and offer a different hot dinner each night of the week.

The Wellfleet Market Place is one of the more quaint and adorable shops on our list. The bulk of the store is a grocery store that features local produce and freshly prepared foods.

However, the store also has a sizeable book collection. In addition, the store features works by local artists that you are able to purchase.

and tourists alike to gather. The general store has a wide variety of local produce, unique food items, and even its own merchandise.

The store also has its own restaurant counter that serves sandwiches, salads, and pizza. Stop by for some delicious food and enjoy the relaxing atmosphere from their beautiful porch.

The West Falmouth Market is much like the other stores on our list in that they provide a grocery store and deli counter. They make their pizza from freshly made dough and even have tons of homemade meals ready to take home and heat.

They also offer a butcher counter with top-quality meat and a wide variety of options. They even have homemade sausage and bacon available.

Can’t find something you’re looking for at the store? Let the employees know and they will do their best to have it in stock next time you come in.

Ironically, the 1856 Country Store was actually built-in 1840. It was originally built to store cranberries; however, it was quickly turned into a shoe store in 1842. In 1856, the ownership of the store changed, and it became the general store that is there today.

While the store was the store used to be a “penny candy store” it now displays a wide variety of unique goods. Of course, you can still purchase candy, but you might pick up a few more things on your way to the register.

The Charm of Old Country Store on Cape Cod

In the era of online shopping and same-day shipping, it’s a nice reprieve to be able to walk into a friendly, locally owned store. The country stores located on Cape Cod serve as the hub of the

community and have done so for several centuries. They aren’t simply just places to buy things, but rather a location to feature local goods while connecting with the community.

Next time you’re visiting Cape Cod make sure to stop by for a bite or a quick look around one of these charming country stores. We also recommend stopping by one of the Cape’s many bookstores, antique shops, or thrift shops to fully embrace the local community.