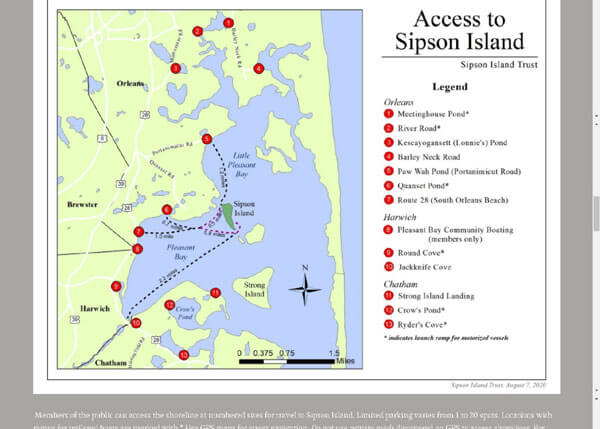 Among the many small islands along the shores of the Outer Cape, two in

particular stand out. At the southern end of the Cape on Pleasant Bay, Sipson Island is a visitor-friendly nature preserve with quite the story to tell. And to the north, off the very tip of the Cape at the entrance to Wellfleet Harbor, Billingsgate stays hidden below the ocean surface except during low tide but has an even more intriguing backstory.

From the early 1700s to recently, Sipson Island was privately owned with seasonal cottages and outbuildings scattered across the island’s rolling hills and coastal bluff, as well as multiple docks and boathouses along its extensive sandy beach. In 2019, the island finally went up for sale for the first time in 300 years and was purchased by the Sipson Island Trust, formed for the sole purpose of preserving,

“undeveloping,” and restoring the natural habitats of the island. The buildings and virtually all traces of historical development will be erased leaving only the island’s diverse woodland, meadow, beach, dunes, and offshore marine habitats along with minimal access support and trails for the public to use while enjoying this little paradise. You can visit the island sunrise to sunset by small boat on the eastern shore and by paddleboard or kayak on the western shore. Due to conservation efforts, pets, fires, and camping are not allowed. Visitors are asked to stay off the fragile dune grasses and vegetation on the beaches and stay on the mowed paths inland. Snorkeling and swimming are allowed, as well as near-shore fishing. This beautiful natural gem is undergoing a lot of changes, all for the better and intended to create a haven for recreation and education.

Billingsgate Island: The Island That Washed Away into the Ocean

At the other end of the Outer Cape, Billingsgate (aka Bellingsgate) represents a different kind of “undevelopment.” In the 1600’s, the island had nearly 60 acres

of land and the area was a prolific fishing ground. In the late 1700s, a trench was dug between the narrow point of the Cape and the island, which allowed erosion to separate the island from the point completely and may have contributed to its ultimate fate. Through most of the 1800s, a thriving community grew on the island. Homes and lighthouses were built and local families enjoyed relative prosperity. Erosion continued, however, eventually overtaking the first lighthouse, then flooding a second repeatedly, and the residents began to relocate. Some of the island homes were actually moved across the harbor and any that remained were eventually claimed by the sea along with the second lighthouse. By the early 1900s, the island was abandoned and by mid-century, it was reduced to a sandbar strewn with bricks, granite and seashells. Today, what remains of Billingsgate only surfaces at low tide, giving it the notoriety of being the Cape’s own mini-Atlantis. Near low tide, visitors on small boats still seek out the sandbar to wander through the last of the rubble, collect seashells, and revel at the power of nature.

For an unrivalled exploration in “undevelopment,” be sure to put Sipson Island and Billingsgate on your Cape Cod itinerary. While Sipson Island isn’t at risk of washing away in the near future, any traces of its 300 year history as a private estate will soon be gone. As for Billingsgate, a few more good storms could possibly eliminate what little is left to be seen at low tide.