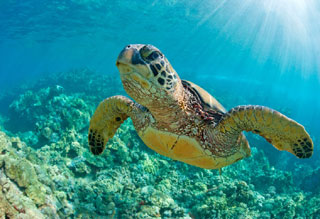 located in Buzzards Bay, just across the Cape Cod Canal. The organization focuses on saving marine life by rehabilitating and then releasing stranded animals back into the wild. They also have an emphasis on science and education, working to advance our understanding of marine wildlife health and conservation.

The iconic hook shape of the Cape can trap migrating species including whales and turtles in the waters of Cape Cod Bay. The colder water and air temperatures this time of year pose a significant risk of cold-stunning for sea turtle species. When the cold-blooded, or ectothermic, sea turtles spend too long in cold waters they become stunned, unable to swim, hunt, or move to warmer waters. These turtles often wash ashore, where they are hopefully rescued by the National Marine Life Center and other groups.

The number of turtles cold stranding has been increasing in recent decades. Since their founding in 1995, the National Marine Life Center has rehabilitated and released over 9800 animals. They’ve had help from their 5,000+ members.

research and study marine mammals and sea turtles. The National Marine Life Center has also removed over 3,000 tons of waste and marine debris from beaches.

On the science front, the National Marine Life Center is working to further the understanding of marine animal health, behavior, and threats. They are studying marine animal parasites, and closely studying the cases of the marine animals they are rehabilitating.

During the pandemic the National Marine Life Center had to adjust its operations yet was able to continue to provide care to marine animals in need. Especially in the early days of the pandemic they noted a much

higher number of seals in need of rescue during Harbor seal pupping season. They attributed this to more people being out and about on beaches, and possibly mistaking lone seal pups whose mothers were out hunting for abandoned seals in need of rescue. In addition, there were more people out and about on the beaches, which might have scared off some of the mother seals.

To learn more about the National Marine Life Center you can visit their Marine Animal Discovery Center! The center features a number of guided activities including Everything About Seals, Sea Creature Craft, and All About Turtles. Guests can get a private tour for up to six visitors, and for an extra fee of $10 can meet an Ambassador Animal, like the resident box turtle! Prior to the pandemic the National Marine Life Center’s Marine Animal Discovery Center and Gift Shop were open to the public on school vacation weeks, daily from Memorial Day to Labor Day, weekends through Columbus Day, and Thanksgiving Weekend. They had also been open for events and Open Houses throughout the year.

How to help the National Marine Life Center

If you’re interested in supporting the work the National Marine Life Center is doing, consider donating to help feed and care for the rescued marine mammals and turtles or purchasing something from their online gift shop. You can also become a member, intern, or volunteer to help out!

If you want to learn more from home, be sure to check out the National Marine Life Center’s Virtual Discovery Zone. This provides activities and on-demand virtual programs, as well as coloring pages!